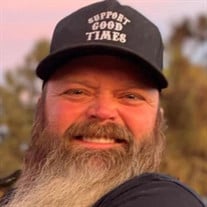 Joshua Camden Robertson passed away in Shamrock, Texas, on December 28, 2021, at the age of 39. Josh was born July 31, 1982 in Pampa, TX, to Jerry and Sherry Robertson. He grew up working construction with his dad, attended Shamrock schools where he played and excelled in football and baseball. He graduated in 2000. He then attended Clarendon College and Vernon College where he played baseball. He worked as a pipeline inspector for many years travelling around Oklahoma, Texas, and New Mexico. He most recently moved back to Shamrock to be near family and the love of his life, his daughter, Cashlyn, to work with his dad and brother and rebuild his old pickup. Josh was loved by all who knew him. He was always the life of the party and kept everyone laughing. The most frequent comments were about him always having a smile on his face, the happiest soul, and he’s the guy you call. He had many close friends who thought of him like a brother. He could say the most off the wall things one minute and the next minute, say something very profound. His gift was fellowship. He made friends everywhere he went. His personality and his affect on people is truly too great to put into words. He is preceded in death by his paternal grandparents Douglas Robertson and Patricia Tipps Robertson. He is survived by his daughter Cashlyn Robertson of Shamrock; his parents Jerry and Sherry Robertson of Shamrock; his grandparents Jackie Davenport of Shamrock and Jerry & SueAnn Campbell of Amarillo; sister Shawn Snodgrass and husband Quentin of Elk City, OK; brother Jonathan Robertson and wife Chelsey of Shamrock; two nephews Reed Snodgrass and Brock Robertson and one niece, Sadie Snodgrass, along with numerous aunts, uncles, cousins, and friends. A celebration of life will be held at the Shamrock Country Club Monday evening, January 3, 2022. Funeral services will be Tuesday, January 4 at 10am, First Baptist Church in Shamrock, followed by graveside services at Shamrock Cemetery. In lieu of flowers please send donations in Josh’s name to: Peaceful Valley Donkey Rescue in San Angelo, TX First Baptist Church Youth, Shamrock, TX Shamrock Community Education Foundation. Arrangements are by Robertson Funeral Directors of Shamrock. The family will be at 16068 FM 2033.

Joshua Camden Robertson passed away in Shamrock, Texas, on December 28, 2021, at the age of 39. Josh was born July 31, 1982 in Pampa, TX, to Jerry and Sherry Robertson. He grew up working construction with his dad, attended Shamrock schools... View Obituary & Service Information

The family of Joshua Camden Robertson created this Life Tributes page to make it easy to share your memories.

Joshua Camden Robertson passed away in Shamrock, Texas, on December...

Send flowers to the Robertson family.