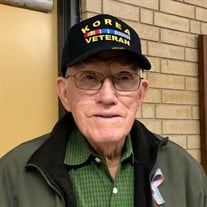 Johnny Derrell Farnsworth, 90, of Memphis passed away on Thursday, February 3, 2022, in Childress. Celebration of Life will be held at the Memphis Country Club Ballroom on April 30, 2022, Starting with a Military Flag Presentation at 4:00 PM Cremation and arrangements are by Robertson Funeral Directors of Memphis. Johnny Derrell Farnsworth was born in Lipscomb County Texas to Fred and Bernice Farnsworth in 1931. Johnny grew up in Canadian Texas where he also graduated from high school. He served in the United States Army and the Korean War. After serving in the war, Johnny moved to Perryton Texas where he worked for Perryton Glass for 12 years. He moved to Memphis Texas where he was the owner and operator of Memphis Glass & Supply. He loved his community, and he was active in multiple organizations including Lions Club, Memphis Country Club, Hall County Hospital Board, and Memphis City Council. He attended First Baptist Church of Memphis Texas and worked with the Youth Group for many years. He was currently attending First Baptist Church of Estelline Texas. Johnny loved most of all his wife, children, grandchildren, and great grandchildren which he enjoyed being with and active in their lives. He is survived by his wife Janie Farnsworth, son, Miles Farnsworth, daughter Stacy McQueen and son in law Max McQueen, daughter Lisa Krause and son in law Robert Krause. His grandchildren Gavin McQueen and wife Jennifer, Creede McQueen and husband Drew McQueen, and Shelby Farnsworth. His great grandchildren, Annabel, Lucas, and Benjamin McQueen. Johnny was the baby of 9 brothers and sisters, and is survived by two of his sisters, Margie Garrison, 99 years old from Spokane, Washington and Lola Kerr, 101 years old from Midland Texas. The family will be receiving visitors in their home and in lieu of flowers, please send donations to Preservation Foundation of Memphis Texas, P.O. Box 295, Memphis, Texas 79245.

Johnny Derrell Farnsworth, 90, of Memphis passed away on Thursday, February 3, 2022, in Childress. Celebration of Life will be held at the Memphis Country Club Ballroom on April 30, 2022, Starting with a Military Flag Presentation at 4:00 PM... View Obituary & Service Information

The family of Johnny Derrell Farnsworth created this Life Tributes page to make it easy to share your memories.

Johnny Derrell Farnsworth, 90, of Memphis passed away on Thursday,...

Send flowers to the Farnsworth family.