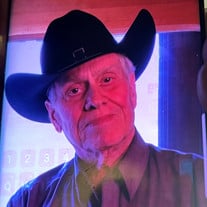 John Harold Studebaker, 83, of McLean passed away on Friday, December 3, 2021 in McLean. Graveside services are scheduled for Monday, December 6th at 10:00 AM at Fairview Cemetery in Pampa with Rev. Thacker Haynes, officiating. Viewing will be held at the funeral home in McLean from 1:00-6:00 PM on Sunday, December 5th. Arrangements are by Robertson Funeral Directors of McLean. Harold was born on August 8, 1938 in Pampa, TX, to Glenn and Laura Prater Studebaker. Harold graduated from West Texas State with a Bachelor’s degree in government. On October 15, 1965, he married his wife, Dianne Ammons Studebaker. After serving in the US Navy, Harold spent his lifelong career as a cattle rancher. He was a hard worker, and strived to be the very best at everything he did. Harold has been a member of the McLean community for the past 40 years. He was a member of the First United Methodist Church in Mclean. He was also a member of the IRI in Pampa for 20 years. Harold was an accomplished fiddle and steel guitar player, and he played in many bands for 50 years. In addition to owning airplanes and being a private pilot, Harold also enjoyed motorcycles and driving fast cars. He enjoyed life and made it fun and enjoyable. He is preceded in death by his parents, Glenn and Laura Studebaker; Father and mother-in-law, Carl and Bennie Ammons; and brother-in-law, Darryl Ammons. Harold is survived by his wife, Dianne Studebaker of McLean; son, Derek Studebaker and wife, Jolene, of Amarillo; sister-in-law, Dot Ammons; and a host of family and friends. In lieu of flowers, memorials can be made to McLean United Methodist Church.

John Harold Studebaker, 83, of McLean passed away on Friday, December 3, 2021 in McLean. Graveside services are scheduled for Monday, December 6th at 10:00 AM at Fairview Cemetery in Pampa with Rev. Thacker Haynes, officiating. Viewing will... View Obituary & Service Information

The family of John Harold Studebaker created this Life Tributes page to make it easy to share your memories.

John Harold Studebaker, 83, of McLean passed away on Friday,...

Send flowers to the Studebaker family.