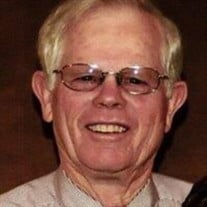 Mr. John Lee Stephens, age 81 of Sparta, TN, passed away at 11:09pm Thursday, November 26, 2020 at Bailey Manor in Cookeville, Tennessee. Arrangements are by Hunter Funeral Home in Sparta, Tennessee. John was born August 6, 1939 in Wellington, TX to the late John William Stephens and Myrtle Inez Skaggs Stephens. In addition to his parents, he is also preceded in death by a sister and brother-in-law Carolyn and Carl Mann, and niece Gaye McGuire. He is survived by his wife of 61 years, Linda Kay Davis Stephens of Sparta. Four sons: Douglas and Beth Stephens of Smithville, TN; Terry and Malinda Stephens of Crossville, TN; Michael and Sheila Stephens of Sparta, TN; and Mitchell and Brandie Stephens of Monticello, KY. Twelve grandchildren: Emilee Stephens, Will Stephens, Leah Spitler (Ethan), Kyle Stephens, Andrew Stephens (Taylor), Nicholas Stephens, Justin Stephens, Abbie Stephens, Tanner Stephens, Eli Stephens, Jesslynn Stephens and Laura Stephens. Two great grandchildren: Waylon and Jessie. Also survived by brother Bobby (Maxine) Stephens of Lefors, TX. John was ordained a deacon at Highland Baptist Church in Amarillo, TX where he taught high school boys Sunday School and served in the bus ministry. John graduated from Hedley High School and attended Clarendon Jr. College. In 1972, he moved with his family to Sparta, TN where he became partners in Tractor Service Co (John Deere industrial equipment). In 1990, he bought a small farm on Cherry Creek where he spent a lot of time raising cattle, which became his pets. He loved working on the farm with his boys and grandchildren. While living in Sparta, he was an active member of First Baptist Church serving as a deacon, counselor for the RA’s, and Sunday School Teacher. He loved his church and the ministry there. He had a kind spirit and was known for his willingness to help others. Funeral services will be conducted 1:00pm, Monday, November 30, 2020 in the Fellowship Hall of First Baptist Church with burial to follow in Oak Lawn Cemetery. The family will receive friends Monday from 10:00am until service time at the church. Brad Walker will officiate. Pallbearers will be the grandsons; Andrew, Nicholas, Justin, Kyle, Will, Tanner and Eli. Honorary pallbearers are the men from First Baptist Church that volunteered to come sit and visit with him, take him riding around, and take him to get a strawberry ice cream cone. In lieu of flowers the family requests that memorial contributions be sent to the building fund of First Baptist Church of Sparta at 308 N. Spring St., Sparta, Tn 38583.

The family of John Lee Stephens created this Life Tributes page to make it easy to share your memories.

Send flowers to the Stephens family.