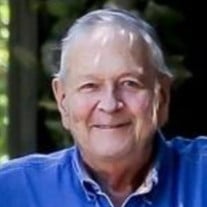 John M. Deaver, II, 82, of Memphis died peacefully at home surrounded by family on Friday, September 4, 2020. Memorial service will be held at the Memphis Hall County Courthouse square on Monday, September 21, 2020 at 10:00 AM with Rev. Marcy Garza, officiating. The red soil of Hall County ran deep through John’s veins. His great-grandfather Judge H.E. Deaver helped establish Memphis in 1890 and became the first County Attorney in 1891. Judge Deaver later founded the Hall County National Bank (now Heritage Hall), where John’s father and older brother both worked. John was born in Memphis on March 24, 1938 to Temple Houston and Bettie Inge Deaver. His lifetime of community service began at age four when he freely roamed the town on his own armed with a bb gun. Later, he claimed to have invented and piloted the first rocket powered bicycle. The neighborhood kids would say that it was just a stovepipe stuffed with burning newspapers that John wired to the frame of his bike. Either way, young John was a sight, jolting across the red brick street with his feet on the handlebars and a scarlet trail blazing behind. John graduated Memphis High in 1956 and went on to earn both Bachelor of Arts and Juris Doctor degrees from the University of Texas at Austin. Hook ‘em Horns! He was on the varsity fencing team and an honorary member of the UT men’s basketball team. His college friends remembered John’s generosity during this period when recalling the time he donated all his landlord’s furniture to the fireplace to keep guests warm during a celebration at his house. In Austin, John met Carol Clare on her first and only blind date. He charmed her with his blue eyes and matching Baby Huey blue shoes, and he thought she was the most refreshing, intelligent woman he’d ever met. They were married on February 17, 1968 and spent the rest of their lives fiercely loving each other. Two, or II, as he was sometimes called, served in the U.S. Army Reserve JAG Corps and spent time stationed in Missouri, Texas and Connecticut. During law school, he worked as a clerk in the City of Austin legal department. Soon after, he found his way back to Memphis and partnered with his namesake uncle and mentor to form Deaver and Deaver law office in 1968. After his uncle’s retirement, he and his childhood friend established Deaver and Chamberlain. John served as City Attorney, was elected District Attorney in 1972 and later County Attorney in 1992. At the time of his death he was the second longest serving County Attorney in Texas. Overall, he spent 53 years practicing law and took immense pride in his service to the people of the community. One client wrote, “You have given us good advice over the years. We have counted on your word many times.” Like most small-town residents, John was a true Texas renaissance man. In addition to his public service and private law practice, John held a real estate broker license. His record is 11 – the number of times he sold one particular house over his career. He also ran the abstract office and worked with many title companies. He had a short, but spirited stint as a pilot when he and Chamberlain bought a plane and taught themselves on the fly, quite literally. He was also passionate about woodworking and could be found at antique auctions across the state, refurbishing furniture and operating the Ivy Cottage on Highway 287. John once co-owned a Puch moped dealership on 5th Street and dabbled in ranching. John truly did a bit of it all. Socially, John was director and treasurer of the Memphis Lions Club, director of the Chamber of Commerce, memorial chairman of the Hall County Chapter of the American Cancer Society, and supported CASA of the Rolling Plains. He also served as the Hall County veterans service officer. He served as an elder at the First Presbyterian Church and was most recently a member of the First United Methodist Church of Memphis. In 2013, John was presented with a flag flown over the State Capitol and honored for his pro bono efforts of “donating your skills and caring to Texas.” The only thing John loved more than the community of Memphis, Texas was his family. Whether riding across Canada on bicycles with his son, teaching his kids to fish, wandering backroads together in his old blue pickup or taking his grandkids to the park, he was in heaven when he was with his family. We’ve lost the sun of our galaxy, but we’re thankful to have been blessed by his spirit. We will remember his light, his laughter and his love and will do everything to honor and carry on his legacy. John was preceded in death by his loving parents; dear siblings, Temple Houston Deaver, Jr. and James E. Deaver and Dorothy Aksamit. Survivors include his beloved wife, Carol Deaver of Memphis; his sons, Dan Deaver and partner Bryce Francis, and Nick Deaver and wife Christine, all of Seattle, Washington; his brother, Dr. Don Deaver of Corpus Christi; two grandchildren, Sydney Deaver and Jack Deaver (John probably showed you all photos of them more than once); and many much-loved nieces and nephews, in-laws and friends near and far. The family requests memorials be sent to CASA of the Rolling Plains [link https://childresscasa.org/donate/] or the First United Methodist Church of Memphis [address: PO Box 747, Memphis, TX 79245]. John 8:32 And you will know the truth and the truth shall set you free.

John M. Deaver, II, 82, of Memphis died peacefully at home surrounded by family on Friday, September 4, 2020. Memorial service will be held at the Memphis Hall County Courthouse square on Monday, September 21, 2020 at 10:00 AM with Rev. Marcy... View Obituary & Service Information

The family of John M. Deaver II created this Life Tributes page to make it easy to share your memories.

Send flowers to the Deaver family.