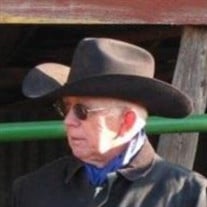 Joe Wesley Don Hall went to be with his Lord and Savior Thursday February 24, 2022. Visitation will be Saturday, February 26, 2022 from 4:00PM -6:00PM at the funeral home. Service will be Sunday, February 27, 2022 in First Assembly of God Church in Clarendon at 2:00PM burial will follow in Citizens Cemetery. Arrangement are by Robertson Funeral Director Clarendon. Donnie was born March 23, 1941 to the home of George William Hall and Willie Mozell Rogers in Wood County Texas. Before his first birthday the family moved to Clarendon Texas where Donnie would call home. On May 2, 1969 he married Cleta Mae Strawbridge and they enjoyed 53 wonderful years together. Donnie spent most of his life as a working cowboy, but also spent time as a welder and a truck driver. But the calling to be a cowboy was always his passion. He worked several ranches around the Panhandle, but the Lewis Ranches in Clarendon was his home for 19 years. Once he had hung up his spurs at the ripe age of 70, he decided to see the country on the back of a Harley. Ironically his favorite mount was a horse named Harley. His greatest passion; however, was loving and serving Jesus. Donnie loved playing his guitar and singing in church. He taught Sunday School and Bible classes. Music was a valuable part of his life. He truly enjoyed getting together with his friends to play and sing anytime the opportunity arose. He also served as a Donley County Commissioner for 16 years. Donnie was preceded in death by his parents, a sister Vanetta Carol Hall and brother Marvin Ray Hall. He is survived by his wife Cleta, brother Perry Michael Hall and wife Loyce. Four sons – Buddy Joe Hall and wife Shawn. Shannon Odell Hall and wife Rhonda, William Shane Hall and wife Hollie, Timothy Don Hall and wife Stacie. Eight grandchildren – Ryan Hall and wife Tori, Lyndsey K’Dawn Pippin and husband Carl, Whitney Hall, Kadee Belle Hall, Dakota Jo Hall, Dillon Hall, Jolie Hall, and Keaslie Hall. Three great grandchildren – Roxie Mae Hall, Jaxson Don Hall, and Amelia Jo Hall and a whole host of other family, friends, and brothers and sisters in Christ. Donnie’s legacy was living a life that exemplified Christ and strived to bring others to know The Lord. His life itself was a witness to everyone who knew him and he freely gave his testimony to anyone he encountered. His final words were, “Oh, my Jesus my Jesus”. In lieu of flowers, donations may be made to: The First Assembly of God Clarendon, Tx or Pleasant Hills Children’s Home PO Box 1177 Fairfield, Tx 75840

The family of Joe Wesley Don Hall created this Life Tributes page to make it easy to share your memories.

Joe Wesley Don Hall went to be with his Lord and Savior Thursday...

Send flowers to the Hall family.