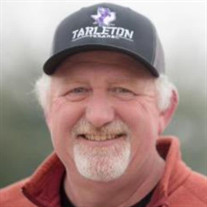 Jody Wayne Powledge, 46, of Allison died Saturday, December 19, 2020 in Kansas City, Kansas. Graveside services will be 2:00 PM Sunday, December 27, 2020 in Zybach Cemetery in Briscoe with Rev. Matt Gary and Bret Begert, officiating. Viewing will be from 1:00-6:00 PM Wednesday at the funeral home with the family being at the funeral home from 4:00-6:00 PM. Masks will be required. Arrangements are by Robertson Funeral Directors of Wheeler. Jody was born April 8, 1974 in Canadian to Teresa and Leonard Powledge, Jr. He graduated from Allison High School in 1992. He married Catherine Hinojosa on September 9, 2000. He drove for Affiliated Foods where he drove over 1 million miles without an accident. Most recently, he worked for Energy Transfer in the Oil and Gas Industry. Jody enjoyed cooking with his friends, traveling to competitions and winning many awards. He was an avid bowhunter and loved to fish. He loved people, helping people, and had a big heart. He touched more people than anyone ever realized. He was a gentle giant. Jody had a strong faith in the Lord. He was a member of the Allison United Methodist Church, but still loved their church family at More Church in Amarillo. He was preceded in death by his grandparents, Leonard and Nova Powledge, Buster and Irene Keys; aunt and uncle, Dean and Karen Keys; aunt, Margaret Hall; uncle, Bobby Hall; and his mother in law, Rosie Hinojosa. Survivors include his wife, Cathe Powledge; his son, Johnathon Powledge and fiance, Sherri; his daughters, Tommie Garcia and husband Jaz and Kiara Laverty and husband Asher; granddaughter, Annastaciah Laverty; a grandson; his parents, Skeeter and Teresa; his sister, Sara Crawford; father in law, Noe Hinojosa; sister in law, Cyndi Cavasos and husband David; his nephews, Ty and Tate Ford; his nieces, Maddie Ford, Jayme Gomez, Mariah Gomez, and Jessica Vargas; and numerous aunts, uncles, cousins, and many special friends. The family request memorials be sent to the Allison United Methodist Church.

The family of Jody Wayne Powledge created this Life Tributes page to make it easy to share your memories.

Send flowers to the Powledge family.