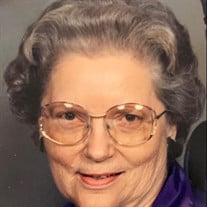 JoAnn Irene Parrish Brooks, 85, formerly of Shamrock died Wednesday, April 15, 2020 in Temple. Private graveside services will be held Saturday, April 18, 2020 in Shamrock Cemetery in Shamrock. Viewing will be held from 9:00 AM-4:00 PM Friday at the funeral home. Due to the COVID mandates, we are only allowing 5 people to enter the funeral home at a time. Arrangements are by Robertson Funeral Directors of Shamrock. JoAnn Irene Parrish Brooks died Wednesday morning, April 15, 2020, at Baylor Scott and White Medical Center in Temple, TX, at the age of 85. She was a devout wife, loving mother, and loyal grandmother. JoAnn was born August 27, 1934, on the Parrish farm in Wheeler County. She graduated from Shamrock High School in 1951 (she always bragged she was the youngest in the class). She worked as a secretary for Coca-Cola Bottling, Ashland Chemical, James Reneau Seed Company, C&H Supply, Tenneco, Dr. David Epp and also served as a teacher’s aide at the Lela Schools. She was a member of the Shamrock Church of Christ and later, the Wylie Church of Christ in Abilene. She is survived by her husband of 59-years, TJ Brooks; three sons and their spouses, Wesley and Mary Brooks of Abilene, Joe and Jennifer Brooks of Lubbock, and Toby and Leah Brooks of Temple; a total of nine grandchildren, Hannah, Sarah, Bethany, Taylor, James, Christopher, Chad, Benjamin and Adler; and recently two great-grandchildren, Tristan John (Little TJ) and Ruth. She is also survived by two sisters, Dovie Miller of Lubbock and Josephine Burgess of Amarillo. JoAnn was preceded in death by her parents, Henry Vinkler (Vink) and Irene Parrish, one brother, Victor Parrish, and one sister, OraLee Parrish Foringer. The family request in lieu of flowers a memorial donation to the Shamrock Church of Christ, PO Box 22, Shamrock, TX 79079.

The family of JoAnn Irene Parrish Brooks created this Life Tributes page to make it easy to share your memories.

Send flowers to the Brooks family.