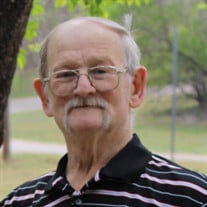 Jimmy Paul Booth, 65, of Memphis passed away on Friday, January 14, 2022, in Childress. Funeral services are scheduled for 2:00 PM Tuesday, January 18, 2022, at the First Assembly of God Church in Memphis with Dale Griswald, officiating. Burial will follow in Fairview Cemetery. Viewing will be held at the funeral home on Monday, January 17th from 9:00 AM to 6:00 PM with family receiving friends from 4:00-6:00 PM. Arrangements are by Robertson Funeral Directors of Memphis. Jimmy Paul Booth was born on February 22, 1956, in Memphis, TX, to Bluford and Eula Stevens Booth. He was one of seven children. Jimmy graduated from Memphis High School and was a lifelong resident of Hall County. He married Ann Brown on December 5, 1976, in Memphis. Jimmy worked as a mechanic for Chamberlin Motors in Clarendon for 20 years before shifting careers. He later retired from TxDOT after 17 and a half years of service. Jimmy attended the First Assembly of God Church in Memphis. He enjoyed spending time in God’s word and praying. He had a love for racing and racecars. He was a Kansas City Chiefs fan who never missed a football game. He also enjoyed reminiscing about his high school football days with his friends. Above all, Jimmy loved his grandkids and spent as much time with them as he could. He is preceded in death by his parents; two brothers, Bobby and Kenneth Booth; and two sisters, Mary Middleton and Lavern Booth. Jimmy is survived by his wife, Ann Booth of Memphis; son, Johnny Booth of Memphis; three daughters, Lisa Booth and husband, Daniel, of Memphis, Janita Booth of Memphis, and Jennifer Benedict of Fort Walton Beach, Fl; two brothers, Don and Allen Booth; 14 grandchildren, Mary, Isaac, Alissa, Jordan, Elijah, Zachary, Joshua, Madison, Isaiah, Kyler, Emily, Lucas, Matiana, and Savannah; three great-grandchildren, Riley, Gracie, and Timothy; as well as numerous nieces and nephews.

The family of Jimmy Paul Booth created this Life Tributes page to make it easy to share your memories.

Jimmy Paul Booth, 65, of Memphis passed away on Friday, January...

Send flowers to the Booth family.