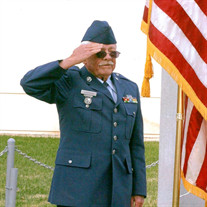 Jim Cockerham, 87, of Howardwick died Saturday, December 18, 2021 in Amarillo. Services will be Tuesday, December 21, 2021 at 2:00PM in the Howardwick First Baptist Church, with Pastor Jim Fox, officiating. Family visitation will be held Monday, December 20, 2021 from 4:00 – 6:00 PM at the funeral home. Arrangements are by Robertson Funeral Directors of Clarendon. Jim was born on October 3, 1934 in Fort Worth, Texas to George W. and Mildred Floyd Cockerham. He married Peggy Laverne McCracken on June 18, 1953 in Tucumcari, NM. Jim had served in the Air Force for twenty years, spent another twenty years at Pantex, and then was the service manager at both Alderson Chevrolet and Chamberlain Motor Company in Clarendon. Prior to moving to Howardwick in 1976, Jim and Peggy traveled all over for Jim’s duties in the Air Force. Jim loved keeping his yard nice, fishing, and painting. He also enjoyed getting to spend time drinking coffee at the café. Jim was a member of the United States Air Force Pistol Team, a member of the American Legion, as well as a Lifetime Member of the Clarendon VFW. Jim had spent many years as the weather reporter for the Donley Co. Sheriff’s Office and was also the representative to the Department of Homeland Security for Donley Co. Jim also served on the Clarendon Volunteer Fire Department and was a past board member for the Donley Co. Hospital District, and also had served as a City Alderman for The City of Howardwick. He was a member of the First Baptist Church in Howardwick. He was preceded in death by his parents, 2 brothers, George O. and Robert Stanley Cockerham; and by 2 sisters, Doris Allen and Jean Owens. Survivors include his wife, Peggy of Howardwick; a son, Gary Cockerham and wife Candy of Clarendon; 3 daughters, Cindy Pharris and husband Ronnie of Clarendon, Lori Allen of Amarillo, Colleen Fross of Howardwick; 9 grandchildren; 16 great grandchildren; several cousins, and by Buffy The Wonder Dog. The family request memorials be sent to the Howardwick First Baptist Church in Howardwick.

The family of Jim Cockerham created this Life Tributes page to make it easy to share your memories.

Send flowers to the Cockerham family.