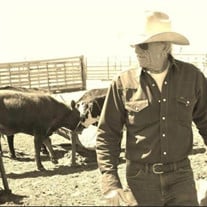 Jerry Lee Hembree, age 75, formerly of McLean passed away Tuesday, June 23, 2020. Graveside services will be 11:00 AM Tuesday, June 30, 2020 in Hillcrest Cemetery in McLean with Rev. Thacker Haynes, officiating. Viewing will be held from 9:00 AM-4:00 PM Monday at the funeral home. Due to the Coronavirus, we are only allowing 5 people to enter the funeral home at a time. If attending the service, please be prepared to maintain social distancing practices. Arrangements are by Robertson Funeral Directors of McLean. He was born July 19th, 1944 in Shamrock, TX to “Pete” and Estelle Hembree. He married Brinda Sue Smith of McLean on July 23rd, 1965 with whom he had two sons Timothy Hembree and Alberto Rivera and two daughters Cynthia Wilson and Rebecca Bellard. He fought a valiant battle against leukemia and was full of life and faith, he never complained, and stayed amazingly positive until the very end. He was always grateful for the love and care of his family and his companion and caretaker Angi Staton. Jerry wrote his own rules and paved his own way. He took a lot of pride in his signature look and the business that he built. He loved driving around in one of his beat up old trucks looking at his crops, pastures, and cattle. He was the greatest “Too Cool Paw” to his thirteen grandchildren and one great grandchild.  We will miss him and his “give it all” attitude, but know his spirit lives in all of those he touched. He was preceded in death by his parents; a brother, Jackie Hembree; and a sister, Edwynna Rohlfing. Survivors include his wife, Brinda Hembree of McLean; two sons, Tim Hembree and wife Linda of Sayre, Oklahoma, and Alberto Rivera of McLean; two daughters, Cynthia Wilson and Rebecca Bellard both of McLean; two honorary daughters, Amber Green and husband Ed of Colorado, and Samantha Melton and husband Sterling of Midland; a sister, Patsy Hembree of Shamrock; a brother in law, Raymond Rohlfing of Oklahoma; a sister in law, Cathy Hembree of McLean; 13 grandchildren; 1 great grandchild; several nieces and nephews; and his best friend, Angela Staton of McLean. The family request memorials be sent to the McLean FFA.

The family of Jerry Lee Hembree created this Life Tributes page to make it easy to share your memories.

Send flowers to the Hembree family.