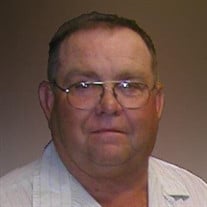 Jerry Horace Green, also known as “Big Jerry” and sometimes referred to as the Mayor of Ashtola, 68, passed away of COVID-19 complications on November 25, 2020, at Northwest Texas Hospital in Amarillo. Burial was in Citizens Cemetery in Clarendon with arrangements by Robertson Funeral Directors. To celebrate Jerry’s life, be a good steward, get your hands dirty, grow something and worry about the weather. Jerry was born to H.A. & Naomi Morris Green on April 24, 1952, in Memphis, Texas, and named by his older brothers and sister. He graduated from Clarendon High School in 1970 and became a diesel mechanic at Texas State Technical Institute. After a brief stint with Caterpillar, he returned to Donley County to farm with his dad and brothers. Jerry married Mary Talley on January 24, 1975, his friends believed primarily for her cooking. They lived at Martin and farmed the Peabody Place for a few years before moving to town (Clarendon). In 1981, they purchased and moved to the Lane Place south of Ashtola, which was adjacent to family farmland owned by H.A. Green, C.B. Morris Company and Green Brothers. He had the pleasure of tending some of those fields over 50 years as well as others for various landlords in Donley and Armstrong Counties. Jerry was a member of the Clarendon Masonic Lodge #700 and served on the board of the Panhandle Groundwater Conservation District. Jerry realized at an early age he was closer to God in a tractor seat than a church pew. If the weather was good, no chance he was leaving the farm. He liked to rise early and work until the day was done, which was often well after the sun set. He grew cotton, peanuts, alfalfa, black-eyed peas, squash, okra, tomatoes, onions, potatoes, watermelon, wheat and silage crops -- anything that would grow in beloved sandy loam. He ate almost any pie Mary would make but preferred chocolate and pecan. Bread was required at all three meals, ranging from biscuits to rolls or cornbread although he would settle for sandwich bread with a little honey or molasses or homemade apricot/pear preserves. He collected antique, pedal and toy tractors. Most of all, he loved farming. While certainly not a saint, if Jerry made it past the pearly gates, he is rounding up the late Danny Holland, Ernie Johnston and Wayne Reynolds to help put a crop in. Jerry is preceded in death by his parents, and his brothers Bernard “Bernie” Joseph Green and Lawrence “Larry” Walton Green. Jerry is survived by his grandchildren, Olivia and Mason, whom he adored; his wife, Mary Green of Clarendon; son Jerry H. Green, Jr. “Little Jerry” or “Buford” and wife Casie of Clarendon; daughter, Christel R. Green and husband Chris Donnelly of Austin; brother Robin M. Green and wife Paulina Jacobo of Lubbock; three sisters Patricia Friesen and husband Willis of Frisco; Beth Step of Sayre, OK; Ellen Morehart and husband Kevin of Woodward, OK; sister-in-law Katherine Williams of Clarendon; and many cousins, nieces and nephews. The family encourages donations to Associated Ambulance Authority of Clarendon, Citizens Cemetery Association, and Donley County Junior Livestock Association as well as prayers for rain.

Jerry Horace Green, also known as &#8220;Big Jerry&#8221; and sometimes referred to as the Mayor of Ashtola, 68, passed away of COVID-19 complications on November 25, 2020, at Northwest Texas Hospital in Amarillo. Burial was in Citizens Cemetery... View Obituary & Service Information

The family of Jerry Horace Green created this Life Tributes page to make it easy to share your memories.

Send flowers to the Green family.