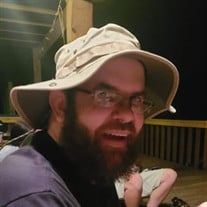 Jeremy Paul Lewis, 43, of Shamrock died Sunday, March 6, 2022 in Carson County. Services will be 10:00 AM Thursday, March 10, 2022 in the First Baptist Church in Shamrock with Rev. Mark Howard, officiating. Burial will follow in Shamrock Cemetery in Shamrock. Arrangements are by Robertson Funeral Directors of Shamrock. Jeremy was born June 27, 1978 in Amarillo to Darrell and Jeannie Conner Lewis. He had been a resident of Shamrock most of his life and was a CNA for Shamrock General Hospital as well as the Wheeler and McLean nursing homes. He married Sandra "Sandy" Thomas on August 24, 2017 in Shamrock. Jeremy was a jokester and enjoyed making people laugh. He loved playing cards and music, especially doing karaoke. He will be deeply missed by all. He was preceded in death by his father; his paternal grandparents, Dewey and Dorothy Lewis, and his maternal grandfather, James Conner. He was accompanied in death by his two sons, Benjamin and Brandon Lewis. Survivors include his wife, Sandy Lewis of Shamrock; his mother, Jeannie Lucas and stepdad Steve of Shamrock; a son, Evan Thomas; his maternal grandmother, Maysie Conner of Shamrock; his brothers, Brandon Lewis of Shamrock and Josh Lucas of Atoka, Oklahoma; his sisters, Misty Everett of Shamrock, Sasha Davis of Canyon, and Shelly Lucas of Atoka, Oklahoma; as well as numerous nieces, nephews, aunts, uncles, and cousins. The family request memorials be sent to Muscular Dystrophy Association.

The family of Jeremy Paul Lewis created this Life Tributes page to make it easy to share your memories.