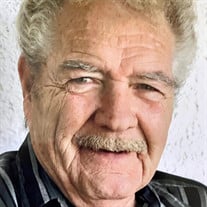 On June 8, 2021, James Pruitt Williams passes away unexpectedly at his home in Wheeler, Texas, after a long battle with heart issues. Memorial service will be held on Wednesday, June 16, 2021, at 1:30pm, in Cornerstone Church in Wheeler with Pastor Erron Mercer, officiating. Inurnment will follow in Wheeler Cemetery in Wheeler. Arrangements made by Robertson Funeral Directors of Wheeler, Texas. James was born on March 28, 1944, in Gray County, Texas, to parents Walter Lonnie Williams and Lona Mae Pruitt Williams. As a child he attended elementary school in Briscoe from 1951-1954 and later 1954-1958 in Wheeler. He then attended Wheeler High School from 1958-1962 and worked summer jobs such as Central Seismograph (driving a bobtail water truck), United Geophysical and grain harvesting. After high school, he attended West Texas State University in Canyon, Texas. He majored in commercial art-illustration. He minored in English and Psychology. After college he married the love of his life, Mildred “Millie” Maurine Gilmer on February 19, 1966. During this time, he opened his own shop called “Williams Body Shop” with his brother, W.L. “Dub” Williams. After 3 years, the partnership dissolved and he returned to driving. He began to work for Associated Milk Producers Inc., in Elk City, Oklahoma, as a route driver/ tanker driver in October of 1968 through March1971. By this time, two daughters were born and a lifelong love was formed. Always looking to better his family, James began to work for LeeWay Motor Freight CO. as a line driver. He drove cross country for 7 years with the company with no accidents. He was a very detail oriented cautious driver. Wanting to branch out on his own, he tried his hand at starting a business of his own. He opened Williams Sand and Gravel CO. in April of 1978. It was a sand-gravel reprocessing plant. He employed his brother “Dub” Williams and 6 other employees. Due to the rapid rise in interest rates and poor economy, it forced the sale of the company which he had worked so tirelessly for. He returned to driving for companies such as Omega Grain and Supply, Henderson Trucking, J.T. Richardson Rig and Construction, and National Carriers. Due to the ill health of his father, Lonnie, he returned home, relocating his family and left the work force for 4 months. He, Millie, and their children cared for Lonnie (and then Loria Mae) until their passing. It was the greatest honor of his life. He then returned to trucking, working for Enron Oil Trading Transportation until he retired. He drove over 2, 585, 000 miles over his 25 ½ year career. James wasn’t “just a truck driver”. He loved many things and metal detecting with his daughter Angie was one he spoke often of. They had many adventures. He loved playing the lottery and actually won over $20, 000 on time on his lucky numbers. He was an amazing artist and left many drawings which will be cherished by his family. He was a loving father to his daughters. He was a pillar of strength, even in his time of weakness, to his daughter Lorrie as they maneuvered through his health issues and Angie’s major health complications. He made an unbearable year be filled with hope, love, and light for her. He never gave up hope for Angie’s continued health and healing. Those waiting to meet him in heaven were his loving wife Millie, beloved father and mother Lonnie and Loria Mae, his dear brother “Dub” and wife Edith. He leaves behind in sadness his 2 daughters Angie Taylor and spouse Jesse Taylor and Lorrie Erwin and spouse Larry Erwin, all of Wheeler, Texas. Grandchildren continuing his legacy are Lane Erwin and fiancé Brittany Putman of Wheeler, Texas, Leslie Erwin and fiancé Sam Wolfe of Childress, Texas, Terra Barr and husband Houston of Wheeler, Texas, and Jamie Taylor and Co-parent Ashley Taylor of Wheeler, Texas. Great-grandchildren who will be missing his presence are Emma Erwin and soon to be born brother Corbin, Milo Barr, Raleigh Taylor, Adden Castagnetta, Blaine and Jacob Wolfe.

On June 8, 2021, James Pruitt Williams passes away unexpectedly at his home in Wheeler, Texas, after a long battle with heart issues. Memorial service will be held on Wednesday, June 16, 2021, at 1:30pm, in Cornerstone Church in Wheeler with... View Obituary & Service Information

The family of James Pruitt Williams created this Life Tributes page to make it easy to share your memories.

Send flowers to the Williams family.