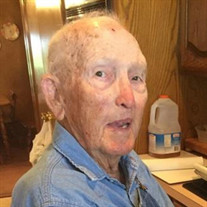 James Madison Verden, 90, a resident of Wheeler for 62 years and Angleton for two years, entered the gates of Heaven December 13, 2020. Graveside services will be at 3:00 p.m., Saturday, December 19 at Wheeler Cemetery in Wheeler with Rev. Matt Gary of First United Methodist Church officiating. The family requests that masks be worn and social distancing be practiced by all who attend the graveside service. Arrangements are by Robertson Funeral Directors of Wheeler. James was born June 6, 1930 in Lakeview to Glen and Sybil Verden. He graduated from Lakeview High School in 1948 and attended Midwestern State University where he worked in the college dairy. He graduated from Texas Tech University in 1953 with a Bachelor’s degree in Agriculture. He married Myrtle Gibson on March 7, 1953 in Memphis. James taught ag classes and sponsored FFA at Follett High School. He began working for Production Credit Association in 1956 when he and Myrtle moved to Wheeler and retired from the company 30 years later. After retiring, he farmed and ranched fulltime. James was an active member of the United Methodist Church in Wheeler for more than 60 years. He was treasurer for the United Methodist Men, served as an usher, and worked on numerous committees. He also raised funds for Ceta Canyon Church Camp. He served on the Wheeler ISD Board of Trustees and was president of the Athletic Booster Club. He actively worked on the economic development of Wheeler. The Chamber of Commerce named Man of the Year in 1971 as well as honoring him for Outstanding Contribution to Agriculture in 1990 and 1998. Wheeler FFA honored him with the Honorary State Farmer Degree. James loved his family and cheering for the Wheeler Mustangs and the Texas Tech Red Raiders. He enjoyed fishing at Lake Texhoma and swapping “whopper fish stories” with Billy Wiggins and having people over for fish fries. Playing cards and dominoes with family and friends was another of his favorite activities. He was preceded in death by his parents; his sister and brother-in-law Jo and Casey Brown; his sister Susie Hignight; his brother Bill Verden; and brother-in-law Jim Pitcock. Survivors include his wife of 67 years, Myrtle; daughters Luinda Verden of Amarillo and Janice and Mike Christley of Angleton; son Jim and Rosanna Verden of Aledo; grandchildren, Brooke and Bobby Lewis of Bullard, Mac Christley of Kemah, Jami Christley of Houston, and Zach and Tatianna Verden of Abilene; great grandchildren, Kade Verden of Bullard, Emalin Verden of Abilene, and Emerson Verden of Abilene; his sister Sandy Pitcock of Fort Worth; and his sister-in-law Evelyn Verden of Haskell. The family request memorials be to Wheeler United Methodist Church or to Lions Club – Tom Britt Memorial Park.

James Madison Verden, 90, a resident of Wheeler for 62 years and Angleton for two years, entered the gates of Heaven December 13, 2020. Graveside services will be at 3:00 p.m., Saturday, December 19 at Wheeler Cemetery in Wheeler with Rev.... View Obituary & Service Information

The family of James Madison Verden created this Life Tributes page to make it easy to share your memories.

Send flowers to the Verden family.