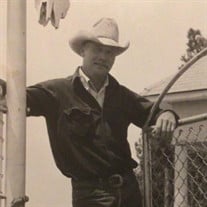 James E. "Jim" Robinson '66, 76, of Clarendon died Monday, November 30, 2020, in Clarendon. Memorial services will be private. A Celebration of Life will be held at a later date. Cremation & Arrangements are by Robertson Funeral Directors of Clarendon. James E. Robinson “Jim” 66’ was born February 21, 1944, in Dallas, Texas to Joe and Vernelle Orr Robinson. Jim was the oldest of 4 children. Jim and his family lived in Tahoka, Texas before moving to Clarendon, Texas, when Jim was a freshman in high school. His dad, Joe, had leased a large part of the JA ranch and moved to Clarendon to start a new life. After high school, Jim followed in the footsteps of his dad ‘42 and his granddad ‘08 and went to Texas A&M, and graduated in 1966, with a degree in Agriculture. After graduating from Texas A&M, he came home to ranch with his dad and married Connie Jean Grady, they had two children, Tish and D’Liss. There were two things you knew for sure, about Jim, you did not tell him Aggie jokes and he did bleed deep maroon. At Texas A&M he was in the infamous dorm, company D-1, Corp of Cadets, “Spider D”, where he met a group of men, who he shared a life long friendship. In July of 1985, Jim married Tessie Howell, and they have two children, Felicia and Zack. In 2010, Jim, wrote and published a book, “Memoirs of a Texas Cowboy”, containing cowboy stories of his life. Jim did advertising for several companies, Levi Strauss, United Supermarkets, Ford Motor Company and had a story written about him in parade magazine in the Sunday paper. Jim loved God, Family, Country, and the Texas A&M Aggie Corp of Cadets. Jim was preceded in death by his mother, Vernelle Orr Robinson and father, Joe Frank Robinson. Jim is survived by his wife Tessie; 3 daughters, Tish Gossett and husband, Mike of Denton, Texas, D’Liss Quisenberry and husband, Coby of Grandview, Texas, Felicia Powell and husband, Jeremy of Clarendon, Texas; one son, Zack Robinson and wife, Jennifer; step-mother, Ruth Robinson, of Clarendon; siblings, Jack Robinson and wife, Susan of Amarillo, Janny Longan and husband, Ronnie of Howardwick, Texas, Joe Robinson, Jr.; step-sister, Libby Talley and husband Billy, of Amarillo; and step-brother Bill Word of Clarendon. He is also survived by grandchildren, Byrklin Quisenberry, ’19, of Grandview, Cason Quisenberry, ’24, of College Station, Emeri and Kreed Robinson of Clarendon, D’nyelle Williams of Missouri, Dalton Gossett of Rhode Island, Dylan, Skyler, and Jade Gossett of Denton; cousin, Gene Treadgill; brothers-in-law, James F. Howell, III and wife LeAnna of Clarendon, Timothy H. Howell and wife Teresa of Wildorado, Joseph B. Howell and wife Rhonda of Clarendon, Peter G. Howell, Sr. and wife Vonna of Amarillo; and Jim has many nieces, nephews, great nieces and great nephews; Texas A&M, Spider D, Class of 1966. Jim’s special care takers, Sis Bond of Clarendon and Peggy Devereaux of Shamrock, Texas and all the special people at the McLean Care Center.

James E. "Jim" Robinson '66, 76, of Clarendon died Monday, November 30, 2020, in Clarendon. Memorial services will be private. A Celebration of Life will be held at a later date. Cremation & Arrangements are by Robertson Funeral Directors... View Obituary & Service Information

The family of James E. "Jim" Robinson '66 created this Life Tributes page to make it easy to share your memories.

Send flowers to the Robinson '66 family.