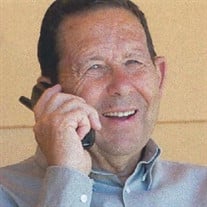 James Carlton Conner, 86, of Shamrock Texas, surrounded by his family, went to his heavenly home to be with Jesus on Friday, February 11, 2022. Services will be 2:00 PM Tuesday, February 15, 2022 in the First Baptist Church in Shamrock with Dr. David Moore and Rev. Mark Howard, officiating. Burial will follow in Shamrock Cemetery in Shamrock. Viewing will be held Monday at the funeral home with family receiving friends for visitation from 4:00-6:00 PM. Arrangements are by Robertson Funeral Directors of Shamrock. James was born on August 2, 1935 to John Earl and Virgie May Conner, in Bethel Texas. After James finished 11th grade at SHS, he took a job at the Texas Theatre. In 1951 James met the love of his life, Maysie Nan McPherson. They married on March 14, 1952 and James and Maysie both went on to work at the Texas Theatre for several years. James chose his career in life doing electric,heating/air installation. On March 4, 1970 James surrendered to the Gospel Ministry and was licensed to preach. James was ordained on May 21, 1972, at First Baptist Church, in Kelton Texas and was Pastor of that church till 1984. He spent much of his life dedicated to PanFork Baptist Encampment. In 1984, James and Maysie returned to Shamrock, where James continued his business as owner of Conner Electric, and managed his numerous rental properties. In his latter years, he spent much of his time working in the Emmaus Community. The most important thing he did on this earth was teach his family and anyone else that would listen, to love Jesus. He taught us by example, with his life. Even hours before his final destination, we could hear him praying for the souls of people that don't know Jesus. James was preceded in death by his father, Earl and mother Virgie Conner, a sister Earline Moore, a brother Robert Thomas Conner and a grandsons Tony Conner and Chad Martinez. He is survived by his wife of 69 years, Maysie, his children, Jeannie and Steve Lucas, Bob and Teresa Conner, John and Evelyn Conner and Becky Thomas. Grandchildren Misty and Shane Everett, Brandon and JoAnn Lewis, Jeremy and Sandy Lewis, Sasha and Ryan Davis, Shelly Lucas, Josh and Alisha Lucas, Adam Conner, Brandi and Shane Shugart, Melody Conner, Monica and Dario Dominguez, Melanie and James Ryan, Justin Martinez, Nick Thomas, Chris Thomas, and numerous great and great great grandchildren.

James Carlton Conner, 86, of Shamrock Texas, surrounded by his family, went to his heavenly home to be with Jesus on Friday, February 11, 2022. Services will be 2:00 PM Tuesday, February 15, 2022 in the First Baptist Church in Shamrock with... View Obituary & Service Information

The family of James Carlton Conner created this Life Tributes page to make it easy to share your memories.

James Carlton Conner, 86, of Shamrock Texas, surrounded by his...

Send flowers to the Conner family.