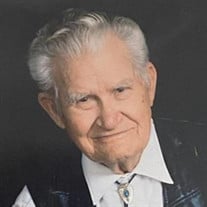 Mr. James Edward Chappell slipped the bonds of earth on Friday morning, September the 17th, at Mesa View Assisted Living in Canadian, Texas. He was 97 years and 11 months old. A visitation will take place Wednesday, September 22nd, at Robertson Funeral Directors from 5:00 - 7:00 pm at 514 North 10th Street in Memphis, Texas. Funeral services will be held in Memphis, Texas Thursday, September 23, 2021, at 2:00pm, at the First United Methodist Church, 121 North 8th Street, with Rev. Matt Cook officiating. Burial will follow in Fairview Cemetery in Memphis. Arrangements are by Robertson Funeral Directors of Memphis, Texas. James Edward (Jim) Chappell was born October 21, 1923 in Lakeview, Hall County Texas. He was the eldest child of nine, seven of which survived to maturity, born to James William Chappell and Judson Calvinia Taylor. He grew up on the family farm in Hall County near Plaska, Texas. Growing up in the Dust Bowl during the Great Depression, he was expected to be a productive member of the family from a very early age, including taking time off from school to help with the cotton crop. He graduated from Memphis High School in 1943, having played as much football as he could, his favorite sport. After graduating high school, Jim enlisted in the U.S. Army. His service began at Fort Sill, OK. His basic training, as well as a specialty in engineering, was completed at Camp Claiborne, Louisiana in 1943. Immediately following, he made the Atlantic crossing on the famous ocean liner turned troop transport, the Queen Mary. After completing many engineering assignments as a specialized bulldozer operator in England, he volunteered to go to France. On June 6th, 1944, the most intense moment of Jim’s life occurred as he drove his tank-dozer off the end of a landing ship into water of unknown depth onto Utah Beach, Normandy. Jim’s work with the Army continued removing deep laid mines in Cherbourg, France and assembling heavy equipment in Wales. In May of 1945 he completed Officer Candidate School and was commissioned as a Second Lieutenant. While serving in Europe, he participated in the liberation of the Dachau Concentration camp. He completed his services overseas as a commandant of a POW camp. Upon returning to the U.S., Jim remained in the Army Reserve and later the Texas Army National Guard. During the Korean War he was recalled to active duty as a First Lieutenant stationed in West Germany. In 1961, he was recalled an additional two years during the Cuban Missile Crisis. He remained in the National Guard and retired as a Major in 1983. While in the Army Reserve, Jim attended Texas A&M College from 1946 to 1950, graduating with a Bachelor of Science Degree in Range Management. Jim remained fiercely proud of his Alma Mater for the rest of his life, rarely missing a game, and decorating everything he could in maroon and white. While at A&M, his best friend Ray Reese introduced him to his beloved, Gwen Phillips. They were married July 10, 1949, at her home in Thorndale, Texas. They remained madly in love for the entirety of their 65-year marriage. After beginning work with the U.S. Department of Agriculture, Jim and Gwen started their family. Moving every couple of years, eldest son Bill was quickly followed by daughter Dee, sons Jimmy and Chuck and daughter Jackie. The family returned to Memphis, Texas in 1967, and added son Eddie to the family. In 1979, Jim retired from the Department of Agriculture. He worked as an agriculture consultant for a few years and served as a Hall County Judge from 1982-1990 before finally retiring for good. Jim Chappell had a known reputation as a wonderful story teller. He always had a joke or a story and could be sure to get a conversation started. His stories about his childhood dog Scott were particularly legendary to all members of his extended family, especially the children, nieces, nephews and grandkids. He loved working in his vegetable garden and kept it up until he couldn’t walk but always maintained his interest in the land. His knowledge of plants and land was uncanny. He knew the history of the ownership and use of the property around Hall County and neighboring counties like no other. Jim’s life impacted many and he will be sorely missed by his children: son Bill Chappell and wife Linda, of Rock Hill, South Carolina; daughter Dee Chappell and husband David Andreason of Dallas, Texas; son Jimmy Chappell and wife Sandy of Canadian, Texas; son Chuck Chappell and wife Liz of Prospect, Connecticut; daughter Jackie Barnett and husband Danny of Irving, Texas; and son Edd Chappell of Dallas, Texas; his grandchildren: Doug Chappell and wife Jill of Charleston, South Carolina; Emily Ray and husband Matthew of Rock Hill, South Carolina; JC Chappell and wife Isabel, of Edmond, Oklahoma; and Taylor Chappell of Fort Worth, Texas; and his great-grandchildren, Catherine Ray, William Ray, and Alexander Chappell. He will join his wife, Gwen Chappell, in heaven, along with his sisters Christine Galloway and Margie Trahan and his brother Al Chappell. Jim was a firm believer in the potential of young people. In lieu of flowers, the family request memorials be sent to Cal Farley's Boys Ranch, 600 SW 11th Street, Amarillo, TX 79101 or online at www.calfarley.org

The family of James Edward Chappell created this Life Tributes page to make it easy to share your memories.

Send flowers to the Chappell family.