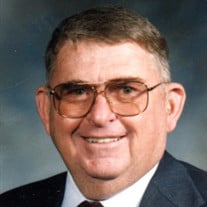 James Cullen Bryant, died November 19, 2020. Graveside Services will be in the Shamrock Cemetery Tuesday, December 1, 2020 at 3:00PM with James Henderson officiating. Cremation and Arrangements by Robertson Funeral Directors. Jim was born November 21, 1932, in Goldthwaite, Texas. His parents were Arthur and Nancy Cunningham Bryant. He was a member of First Baptist Church in El Paso. He married Esther Ann Scrivner on August 23, 1958. Jim earned a B.A. and B.S. Degrees from West Texas A & M University. Jim taught thirty plus years in McLean, Shamrock, and El Paso. While teaching in Shamrock he coached UIL Number Sense, Calculator Application, and Debate, and Jim’s students became State Champions in all three events. Jim felt fortunate that he was able to combine his love of teaching with his love for competitions. In fact, after he retired at age seventy-three, he became a permanent substitute teacher at Amarillo High School. Jim served in the army during the Korean conflict. He served two years in the regular Army, four years in the Reserves, and eight years in the National Guard for a total of fourteen years. Jim was preceded in death by his parents, two brothers, and three sisters. Survivors include his wife, Ann, numerous nieces, and nephews, and his brother-in-law, Tom Scrivner. In lieu of flowers, the family requests that memorials be sent to: Texas Children's Hospital, 6621 Fannin Street, Houston, Texas 77030.

The family of James Cullen Bryant created this Life Tributes page to make it easy to share your memories.

Send flowers to the Bryant family.