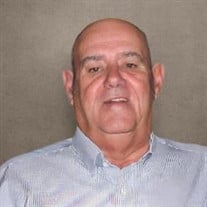 Jackie Ray Blum was born on September 21, 1947, to Ella Bee and Jackie Lee Blum in Memphis, Texas. He went to be with his Lord on November 15, 2021. He married his high-school sweetheart and love of his life, Sharon Kay on November 1, 1966, and had three pretty-good kids, Jennifer, Lee, and Dustin. Jackie retired from Burlington Northern Railroad in 1987. He went on to be a business owner, making the best My-T-Burgers and chicken-fried steaks at the DeVille. He was a long time and successful salesman for DMIC. He enjoyed playing golf and supporting the Cyclones. He was a minister at Red Marble Ministries and shared his faith with all who would listen, bringing many to know the Savior. The most important thing to Jackie was his family. He was happiest when he had his kids and grandkids sitting around the table playing dominoes or card games. He cherished his wife and loved to spoil her. Jackie was a caring man who would help anyone in need at any time. He was a friend to many and never met a stranger. He was one of a kind and a man with a larger-than-life personality who will be missed by all. He is survived by his wife, Kay; his daughter, Jennifer Clark; his sons, Lee Blum and Dustin (Shelly) Blum; his sister, Pat (David) Smith; his sisters-in-law, Lou (Charles) Crockett and Rita (Jose) Flores; his grandchildren, Nikki Kilgore (Daniel), Jarred Kilgore, Colin Clark, Emilee (Brandon) Evans, Carly Blum, Kaleb Blum, and Dakota Hutchinson; his great-grandchildren, Alyx Kilgore, Daycen Austin, Tobyn Lopez, John Kilgore, Jacob Kilgore, Cyprus Kilgore, Ryker Evans, and Rhett Evans; numerous nieces, nephews, and cousins. He is predeceased by his parents, Ella and Jackie Lee Blum and his brother, Jimmy Blum. In lieu of flowers, the family asks that donations be made to a charity of your choice. Memorial services will be 2:00 PM Friday, November 19, 2021 in Red Marble Ministries Church in Memphis. Viewing will be Thursday at the funeral home with family receiving friends from 4:00-6:00 PM.

Jackie Ray Blum was born on September 21, 1947, to Ella Bee and Jackie Lee Blum in Memphis, Texas. He went to be with his Lord on November 15, 2021. He married his high-school sweetheart and love of his life, Sharon Kay on November 1, 1966,... View Obituary & Service Information

The family of Jackie Ray Blum created this Life Tributes page to make it easy to share your memories.

Send flowers to the Blum family.