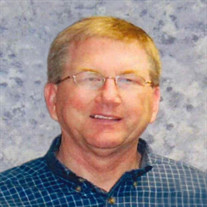 Funeral Services for Jack “Allen” Crawford will be held on Tuesday, February 23, 2021 at 11:00 a.m. at the Kearney Church of Christ in Kearney, Nebraska with Minister Greg Clark and Russell A. Crawford, Evangelist, presiding. Jack Allen Crawford, age 65, son to W.J. and Jewel Crawford, was born April 12, 1955, in Canyon, Texas, and passed away February 17, 2021 at his home in Holdrege, Nebraska. Allen received his primary education in the Tulia, Texas public school system, graduating Tulia High School in 1974. He then went into higher education at West Texas State University, graduating with a Bachelor’s of Science in Ag Business in 1985. He met Minda Elizabeth “Beth” Hambright in 1980, in the singles program at the Central church of Christ in Amarillo, Texas. They were married on September 26, 1981, at the McLean church of Christ in McLean, Texas. Allen spent his life working and serving the Lord, and working in agricultural activities. He grew up on the Crawford family farm in Tulia, Texas, where he worked on the family farm until the late 1970’s and then took a job as a seed research analyst for the De-Kalb Seed Corporation in Lubbock, Texas. After working for De-Kalb, he took a job working as a grain inspection grader for the Amarillo Grain Exchange in Amarillo, Texas. In 1981, he began his career working for Cargill and was with the company for 38 years serving in various leadership capacities in locations in Texas, Oklahoma, Kansas, and Nebraska. Allen was a faithful member of the churches of Christ and served as a song leader and Bible class teacher. In 1992, Allen served as a Cub Scout leader for Troop #199 in Elkhart, Kansas and assumed the role of Scout Master of the Cub Scouts in 1994. He participated in Scouting until 2000. He was also a long-time member of the Grain Elevator and Processing Society (G.E.A.P.S). Allen enjoyed spending time with his family. Whether it was at home or on vacation, he treasured every moment that he got to spend with his loving family. He enjoyed fishing and hiking in the mountains of South Eastern Colorado and enjoyed working on various home improvement projects and vehicle maintenance. Allen was preceded in death by: his parents, W.J. and Jewel Crawford; and two brothers: Lynn Crawford; and Steve Crawford. Survivors include: his wife, Beth Crawford of Holdrege; son and daughter-in-law, Russell Crawford and wife, Shannon of Salina, Kansas; son, Kinneth Crawford of Holdrege; one brother, Greg Crawford and wife, Debbie of Hastings, Oklahoma; father-in-law and mother in-law, Kinneth and LaRue Hambright of McLean, Texas; sister in-law, Kinnette Anderson of Fairfield, Texas; and two brothers in-law: Bill Hambright and wife, Vicki of Lubbock, Texas; and Tony Hambright and wife, Niki of Amarillo, Texas; as well as a host of nieces and nephews. Visitation will be held on Monday, February 22, 2021 from 5:00 p.m. – 7:00 p.m. at the Nelson-Bauer Funeral Home in Holdrege. A graveside service is scheduled for Thursday, February 25, 2021 at 2:00 p.m. at Hillcrest Cemetery in McLean, Texas. The family is requesting memorials be made to New Mexico Christian Children’s Home, 1356 New Mexico 236 Portales, New Mexico 88130-9983. The Nelson-Bauer Funeral Home in Holdrege, Nebraska is in charge of arrangements. Local arrangements are by Robertson Funeral Directors of McLean, Texas.

Funeral Services for Jack &#8220;Allen&#8221; Crawford will be held on Tuesday, February 23, 2021 at 11:00 a.m. at the Kearney Church of Christ in Kearney, Nebraska with Minister Greg Clark and Russell A. Crawford, Evangelist, presiding.... View Obituary & Service Information

The family of Jack Allen Crawford created this Life Tributes page to make it easy to share your memories.

Funeral Services for Jack “Allen” Crawford will be held on Tuesday,...

Send flowers to the Crawford family.