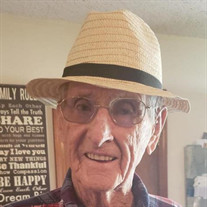 Be good! What a simple phase, but JD Skaggs made it a way of life. Born in Wellington, Texas on November 1, 1931 he began a journey to being an unassuming giant of goodness. As a young child his parents, John Fenton Skaggs and Hattie Ophelia Plunkett Skaggs, moved the family to Hedley, Texas to farm a mountain of caliche. Hard ground and hard times made his brothers, Frank, John Edward, Harvey, Douglas Jr, Harry, and Billy Ray, tough enough to take care of their only sister Inez. After leaving school he followed the lead of his brothers and joined the United States Army in 1952 and left the farm for the first time. He was stationed at Fort Sill and Fort Bliss as a fuel transportation technician when he was deployed to Korea where he served two deployments. In 1954 JD received an honorable discharge and returned to Hedley to help his parents on the farm. As fate would have it, he began to drive the bus for Hedley High School and met the love of his life, Nena Marie Hill, and began the next chapter promptly after her graduation. On June 4, 1955, Nena Marie Hill became Mrs. Skaggs and the story of the good man truly began. You see he was always a family man. He cared for his brothers and sister. He cared for his parents. He cared for his friends and army comrades. But his real show of love was with the births of his three daughters, Vicky, Kay, and Cheryl. He made a life around raising and nurturing his wife and family and surrounding them with love. He worked as a mechanic for several years and earned a living by the sweat of his brow and the wiry strength of his hands. Some years later he got a job as a John Deere tractor mechanic. It has been said that he bled green and yellow and many people began to believe that his name was just initials for John Deere as his name became synonymous with the brand. He became the prevailing expert in the area and a highly respected diagnostician of ailing machinery. After retiring from John Deere he began working for Donley County as an equipment operator. You see he had fixed every kind of piece of heavy equipment but his real fascination was with the operating of the toys he repaired. He truly loved his work and the ability it gave him to provide for his family. JD raised three beautiful daughters and his face glowed when he talked about them just like he did when he talked about Marie. He was so proud of his ladies and he loved his extended family, which was always expanding. As each of his brothers and sister passed away JD would gather in their children and families. He was the consummate patriarch of his family and his arms always seemed long enough to wrap the whole brood in a hug. He loved his nieces and nephews, cousin and adopted children and always had a kind word, a hug and a smile for each and every one of them. When he became a grandfather his capacity to love exceeded all logic and expectation. There are a million words to describe a man of few words. Words like gentle, kind, gracious, godly, understanding, compassionate, loyal, strong, and resilient don’t even begin to describe the man he was to the members of his family and friends. No I believe there was but one word, he was GOOD. In every sense of the word he was good. He was a faithful follower of Jesus Christ and prayed every day. He loved his church family and his godly nature lead him on the journey to genuine goodness. He taught us all how to be good through his example and we will always strain to reach the lofty standard he set for us. We will forever be challenged to uphold the legacy he worked so hard to instill in us. He became a hero, a mentor, a shoulder, a confidant, a helping hand, and stronghold of love for many of us throughout life. Therefore in his memory I challenge each of you to uphold the standard of goodness you have been shown. On December 28, 2020, at the age of 89, he finally received the reward he had been striving for so long and received his wings in glory. He was proceeded in death by his parents, six brothers, one sister and the love of his life Nina Marie. He is survived by his daughters Vicky Knowles and husband Anthony of Memphis, Kay Manuel and husband Gary of Memphis, and Cheryl Skaggs of Broken Arrow, Oklahoma, three grandsons Josh Talley and wife Candace of Memphis, Matt Talley and wife Jessie of Hartley, Texas, and Dustin Knowles and wife Krista of Keller, Texas, seven great grandchildren and a host of nieces, nephews, cousins and friends. A family lead memorial service will be held at the First United Methodist Church in Hedley, Texas on January 2, 2021 at 10:00 AM. All family members are welcome to attend and ample room will accommodate social distancing and protect his greatest treasures. Graveside services will be held at 1:00 PM at Rowe Cemetery. All friends and family are encouraged to attend and celebrate a beautiful life of long enduring love and goodness.

Be good! What a simple phase, but JD Skaggs made it a way of life. Born in Wellington, Texas on November 1, 1931 he began a journey to being an unassuming giant of goodness. As a young child his parents, John Fenton Skaggs and Hattie Ophelia... View Obituary & Service Information

The family of J.D. Skaggs created this Life Tributes page to make it easy to share your memories.

Be good! What a simple phase, but JD Skaggs made it a way of...

Send flowers to the Skaggs family.