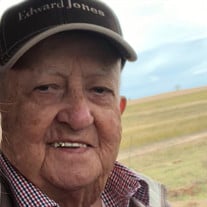 Hyland Cassius Weaver, 85, of Wheeler died Thursday, April 9, 2020 in Wheeler. Private graveside services will be held Saturday, April 11, 2020 in Wheeler Cemetery in Wheeler. Viewing will be held from 9:00 AM-4:00 PM Saturday at the funeral home. Due to the COVID mandates, we are only allowing 5 people to enter the funeral home at a time. Arrangements are by Robertson Funeral Directors of Wheeler. Hyland was born December 19, 1934 in Vici, Oklahoma to Urban Carlisle Weaver and Ona Mae Heaivilin Weaver. He was a 1957 graduate of Southwestern State College in Weatherford, Oklahoma where he received his bachelors in Pharmacy. He married Betty Sue Walker on August 24, 1957 in Vici, Oklahoma. He owned Hyland's Pharmacy in Wheeler from April 1961 to December 1988 where he employed numerous high school students over those years. He was also instrumental in bringing the hospital to Wheeler. Hyland received the 50 year Golden Pharmacy Graduate award from Southwestern Oklahoma State University in 2007. He was a 60 year member of the Masonic Lodge and was a 32nd degree Mason. He loved traveling and had his pilot's license where he also loved flying planes. He was a steward of conservation of land and loved his cattle and race horses. Hyland enjoyed going to Mel's Diner everyday and being a part of the breakfast family. Hyland received the Pioneer of the Year award from the Wheeler Chamber of Commerce in 2008. He was a member of the First United Methodist Church in Wheeler. The family would like to thank Parkview Hospital and BSA Hospice of the Southwest. He was preceded in death by his parents; and his wife on March 6, 2009. Survivors include his son, Tommy Weaver and wife Sharla of Wheeler; his daughter, Tracy McMeans and husband Joe of Stamford; 4 grandchildren, Lauren Chick and husband Brandon, Leslie Weaver and Brandon Jessup, Myka Novosad and husband Ryan, and Cash McMeans and wife Mindy; 3 great grandchildren, Thomas Chick, Caseton Novosad, and Josie McMeans; his close friend and right hand man, Augustine Gonzalez. The family request memorials be sent to the Wheeler Volunteer Fire Department, North Wheeler County EMS, or the First United Methodist Church in Wheeler.

The family of Hyland Cassius Weaver created this Life Tributes page to make it easy to share your memories.

Send flowers to the Weaver family.