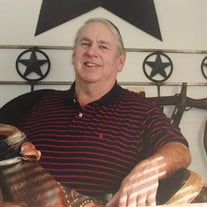 Monroe Shannon, 74, of Shamrock, passed away on Wednesday, November 18, 2020, in Wheeler. Graveside services are scheduled for Saturday, November 21, 2020, at 10:00 AM at Shamrock Cemetery. Viewing will be held Friday, November 20th from 9:00 AM- 6:00 PM, with family receiving friends from 4:00-6:00 PM. Hugh Monroe Shannon II was born on March 15, 1946, in Aransas Pass, Texas, to Hugh and Johnnye Stills Shannon. Monroe attended Shamrock High Schools and later graduated from Texas A&M with a teaching degree. Monroe served in the army during the Vietnam war and was awarded for his bravery and sacrifice with four Purple Hearts. After returning home, Monroe taught agricultural science at Lockney High School. It was there that he met the love of his life, Fleeta Carthel Adams. Monroe lovingly accepted Fleeta’s three children as his own on June 2, 1979, when they wed in Floydada. Monroe and Fleeta moved to Shamrock in 1980 and have been rooted in the community ever since. Later, they expanded their family by adding two more sons. Monroe taught ag at Shamrock High School for over 30 years. He believed in the power of education and invested in his students’ lives. He loved watching them succeed into adulthood. After retiring from teaching, Monroe and Fleeta started their own real estate business. For 10 years, they stayed busy during the oil boom before declining health forced them into full retirement. Monroe loved the ocean and enjoyed returning to the Aransas Pass area where he spent his childhood. He loved to fish, going to the races, and telling stories with his old buddies. There are countless stock show memories that could be shared by all that knew him. There was nothing he enjoyed more than spending time with his children, grandchildren, and great-grandchildren. He is proceeded in death by his parents, and grandson, Jonah Adams. Monroe is survived by his wife, Fleeta Shannon; four sons, Kyle Adams and Adam Chance of Port Isabel, Lon Adams and wife Nicki of Hedley, Hugh Shannon of Lubbock, and Aaron Shannon of Shamrock; daughter, Leeta Prather and husband Stacey of Erick, Oklahoma; brother, Mike Shannon and wife Anna; sister, Jo Ann Green; six grandchildren, Brandon Prather and wife Nona, Angela Greer and husband Levi, William Adams, Harper Adams, Austin Adams, and Kati Adams; and five great-grandchildren, Janie Prather, and Aubree, Bradix, McCoy, and Kabe Greer. The family would like to thank Wheeler Nursing & Rehabilitation and staff for the special care given to Monroe over the last two years. In lieu of flowers, the family requests memorials be sent to Meals on Wheels and the Shamrock Cemetery fund.

Monroe Shannon, 74, of Shamrock, passed away on Wednesday, November 18, 2020, in Wheeler. Graveside services are scheduled for Saturday, November 21, 2020, at 10:00 AM at Shamrock Cemetery. Viewing will be held Friday, November 20th from 9:00... View Obituary & Service Information

The family of Hugh Monroe Shannon created this Life Tributes page to make it easy to share your memories.

Monroe Shannon, 74, of Shamrock, passed away on Wednesday, November...

Send flowers to the Shannon family.