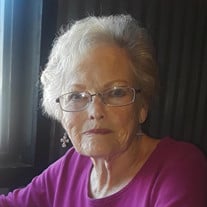 Hazel Ann Weigl, 77, of Howardwick, TX, peacefully passed away on Tuesday, April 20, 2021, in Mclean, TX. Graveside services are scheduled for Tuesday, April 27, 2021, at 11:00 AM at Sunset Memorial Park in Gallup, New Mexico. Local arrangements are by Rollie Mortuary in Gallup, NM. Hazel was born on December 18, 1943, in Gallup, New Mexico, to George and Grace Picard Fry. Hazel was one of seven children. After graduating from high school, Hazel started her career as a telephone operator for Mountain Bell Telephone where she worked for many years. Later, Hazel began working for Continental Divide Electric Coop. where she retired in 2008. After retirement, Hazel moved to Howardwick in 2018 to be closer to her daughter. Hazel was a member of the Church of Jesus Christ of Latter-Day Saints. She enjoyed sewing and crocheting. Hazel also loved to watch the butterflies and her cats. She is preceded in death by her parents, George and Grace Fry; brother, Bill Fry; three sisters, Winifred Bond, Verna Young, and Georgia Vanfleet; and her son, Ronald Weigl. Survivors include her daughter, Melissa Hasler (Mike Willey); brother, Jim Fry (Jackie); sister, Helen Montano (Louis); two grandsons, Russell Hasler, and Brannon Hasler (Kari); great-granddaughter, Shelby; and numerous nephews, nieces, and cousins.

The family of Hazel Ann Weigl created this Life Tributes page to make it easy to share your memories.

Send flowers to the Weigl family.