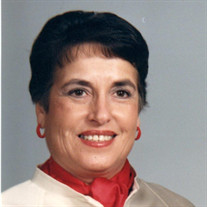 Gracie Marie Michael, 83, of Amarillo, formerly of Wellington, died Saturday, March 20, 2021 in Amarillo. Graveside services will be 2:00 PM Thursday, March 25, 2021 in Abernathy Cemetery in Abernathy with Lowell Schmidt, officiating. Visitation will be from 4:00-6:00 PM Tuesday at the funeral home. Arrangements are by Robertson Funeral Directors of Clarendon. Gracie was born June 26, 1937 in Alfalfa County, Oklahoma to Obed and Helen Frances Dupus. She was raised on a farm in McWille, Oklahoma and was a graduate of Helena High School in Helena, Oklahoma. She married Charles D. Michael on July 30, 1957 in Munday, Texas. Gracie had been a resident of Wellington since 1977 where she was a homemaker and a sales representative for Mary Kay Cosmetics. She loved traveling with her sister Ruby and collecting elephants from her travels. She enjoyed working in the yard, gardening, and scrapbooking. She also loved cooking and her family always looked forward to Christmas where she made her special candy. She was a member of the First United Methodist Church in Wellington where she was involved with the 23rd Psalm Women's Circle Group. She was preceded in death by her parents; her daughter, Kathryn J. Michael; a brother, Edwin Dupus; and a sister, Delores Van Noy. Survivors include her son, Charles "Chuck" Michael, Jr. and wife Rowena of Amarillo; her brothers, Carl Dupus and wife Harriett of Enid, OK and Jim Dupus and wife Helen of Belton, Missouri; her sister, Ruby Wood of Edmond, OK; three grandchildren, Charles D. Michael, III, Sarah K. Mitchell, and Anna Grace Solinap; seven great grandchildren, Colton, Cannon, Landon, Emma Grace, Conner, Levi, and Abraham; a brother in law, A.J. Van Noy. The family request memorials be sent to Wellington Meals on Wheels, 1000 Amarillo Street, Wellington, TX 79095; First United Methodist Church , 901 Bowie Street, Wellington, TX 79095; Amarillo; Meals on Wheels of Amarillo, 7550 Outlook Dr, Amarillo, TX 79106; or South Georgia Church of the Nazarene, 5016 Susan Dr, Amarillo, TX 79110.

The family of Gracie Marie Michael created this Life Tributes page to make it easy to share your memories.

Send flowers to the Michael family.