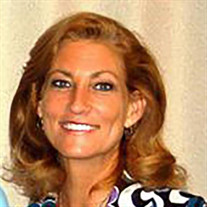 Ginger Ann Haynes, 61, of McLean, Texas, passed away Tuesday, April 13, 2021, in Pampa, Texas. Public visitation will be from 3 p.m. to 6 p.m. Friday, April 16, at Robertson Funeral Home in McLean. Services will be at 2 p.m. Saturday, April 17, at McLean United Methodist Church at 219 Gray St. in McLean, Rev. Thacker Haynes officiating followed by a graveside service at Denworth Line Camp Ranch, west of the John M. Haynes house. All are welcome at the services and graveside. Arrangements are by Robertson Funeral Directors of McLean. Ginger was born on June 2, 1959, in Miami Beach, Florida, to James V. and Annette Demers Joynes. She graduated from North Miami Beach Senior High School in 1977 and attended business college for two years. She majored in secretarial science at Miami Dade Community College in 1981. She was an IRE Financial executive secretary for several years before she met David Smith Haynes in May 1986 on the USS Norway cruise ship. They were married on November 22, 1986, in Miami, Florida. From 1987 to 1996, Ginger was an executive secretary for Mesa Inc. in Amarillo, Texas, T. Boone Pickens’ company, where she was skilled at typing, editing and other secretarial work. She and David lived in Amarillo from 1987 to 1995. From 1999 to 2018, she worked at Rick Husband Amarillo International Airport for American Eagle/American Airlines, where she was a supervisor, instructor, ground security coordinator, safety coordinator and customer relations agent, making a daily roundtrip drive between McLean and Amarillo. She did leadership training and recurrent instructor and ground security coordinator training at the American Airlines and Envoy training centers at DFW Airport. Beginning in 1998, she also did transcription, quality control and risk control assessment on behalf of ARNO Risk Control LLC. She loved all her co-workers at Mesa, ARNO and the airline. David and Ginger’s first child, John Ruel, was born in Amarillo on July 27, 1989. Their daughter, Sheri Ann, was born in Amarillo on Nov. 27, 1991. In 1995, the family moved to McLean, where they lived in the house David’s grandparents, Ruel and Gladys Smith, had built in 1958. She had an unforgettable sense of humor and a vibrant personality. She always brought energy into the room, was the life of the party and, if she knew you at all, was sure to give you a big hug. She and David’s first grandchild, Dallas, was born in 2017, and she was Dallas's “Gingy.” She loved playing chase, hide-and-seek and other games with him for hours. Their second grandchild, Jenesis, was born in 2020, and Gingy also adored her. She loved constructing things, building box forts for her kids (also for Dallas) and even built a tree fort from the ground up in the back yard for Sheri and John when they were kids that was 20 feet tall. She loved traveling and seeing the world, funky music, watching “Funniest Home Videos,” sunbathing and playing board games with her kids. She went to every activity her kids participated in and always made sure to video it for safekeeping. On her days off from work, she always took her kids to do something special such as going to the movies, to a play area or swimming. When her kids had sleepovers, she went above and beyond to be sure they and their friends had fun. Ginger was known for giving generous gifts on birthdays and at Christmas. She shopped all year, and on Christmas Eve, she would put multiple gifts for each extended family member under the tree at the ranch. According to David, she will be greatly missed by Walmart and Amazon. She also always was eager to help in the kitchen for holiday meals. She was preceded in death by her father in 1970; her mother in 1995; and her brother, Jimmy, in 1995. Ginger is survived by her husband, David Smith Haynes, of McLean; her son, John Ruel Haynes, and his wife, Jordan Haynes, of Celina, Texas; her daughter, Sheri Ann Copenhaver, and her husband, Tyler D. Copenhaver, of McLean; her grandson, Dallas David Copenhaver, of McLean; and her granddaughter, Jenesis Joyce Haynes, of Celina; and a host of extended family and friends. Memorials may be sent to the McLean United Methodist Church, 219 Gray St., McLean, Texas 79057.

Ginger Ann Haynes, 61, of McLean, Texas, passed away Tuesday, April 13, 2021, in Pampa, Texas. Public visitation will be from 3 p.m. to 6 p.m. Friday, April 16, at Robertson Funeral Home in McLean. Services will be at 2 p.m. Saturday, April... View Obituary & Service Information

The family of Ginger Ann Haynes created this Life Tributes page to make it easy to share your memories.

Send flowers to the Haynes family.