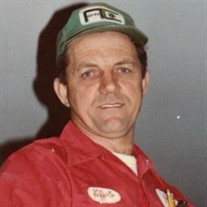 Giffert Tuttle, Sr., 85, of Pampa died Monday, December 6, 2021 in Pampa. Viewing will be held Thursday, December 9, 2021 in Robertson Funeral Directors in Clarendon. Local Arrangements are by Robertson Funeral Directors of Clarendon. Services and burial arrangements are pending with Cox-Burkitt Funeral Home in Beaver, Ohio. Memorial services will be held at a later in date in Texas. Giffert was born February 9, 1936 in Knott County, Kentucky to Lawrence and Inez Thornsberry Tuttle. He had been longtime resident of Ohio before moving to Texas where he had been a resident of Pampa and Clarendon for several years. He worked in Commercial construction all his life. He loved coaching softball and ran the concessions at the Pampa Rec Center for 8 years. He was preceded in death by his parents; his first wife, Panzie Tuttle; a son; a daughter, Pammy Tuttle; and two brothers, Alvin and Dan Tuttle. Survivors include his wife, Gail Tuttle of Pampa; his sons, Giffert Tuttle, Jr. and wife Tonya of Springfield, Ohio, Gary Tuttle and wife Tina of Pampa, Micheal Tuttle of Pampa, Brent Tuttle and wife Sharlene of Clarendon, and Chad Smith of Amarillo; his daughters, Patricia Fuller and husband Terry of Springfield, Ohio, Peggy Quigley and husband Jeff of Cheyenne, Wyoming, Penny Longan and husband Jakie of Clarendon, and Chris Davis and husband Marvin of Clarendon; three brothers; four sisters; 32 grandchildren; 38 great grandchildren; and one great great grandchild. In lieu of flowers, the family request memorials be sent to the American Heart Association.

The family of Giffert Tuttle Sr. created this Life Tributes page to make it easy to share your memories.

Send flowers to the Tuttle family.