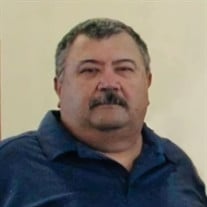 Gerardo “Chick” Saenz 58 of Lakeview, Texas passed away Sunday, October 17th in Memphis. Rosary will be said at 6:00 PM Thursday, October 21, 2021 in Robertson Funeral Directors Heritage Chapel in Memphis. Mass will be celebrated at 10:00 AM Friday, October 22, 2021 in Sacred Heart Catholic Church in Memphis. Burial will be in Fairview Cemetery in Memphis. Arrangements are by Robertson Funeral Directors of Memphis. Gerardo was born September 14, 1963 to Eulogio and Oralia Saenz In Tamaulipas, Mexico. He married Adela Amaro in Rio Grande City, Tx on May 24,1986 and were married for 35 years. They moved to Lakeview for better job opportunities where they lived ever since. He went on to work for the late Morris Davis at Valley irrigation, and he always had a story to tell from the time he spent with Mrs Minnie Lou Bradley at Bradley 3 Ranch. Chick was a story teller and an adventurer and that took him to Grand Junction, Colorado where he worked for Grey Wolf before his retirement. The last adventure he took on with his wife was his long life dream of having a taco stand, and he did in May of 2016 when he opened Tacos El Gasparin. He was a lover of music and always enjoyed playing his bass guitar. Chick made friends everywhere he went, no one was a stranger to him as he had conversations with anyone and everyone, and he always tried to lend a hand where he could. He was preceded in death by his father, Eulogio Saenz, a brother Joel Saenz, and his lifelong best friend Raul Vela. He is survived by his wife, Adela Saenz and son, Oskar Saenz both of Lakeview, daughter, Melissa and husband Antonio Cantu, three grandchildren, Tony, Edgar, and Giovanni Cantu all of Memphis, and numerous brothers, sisters, nieces, nephews and friends.

The family of Gerardo "Chick" Saenz created this Life Tributes page to make it easy to share your memories.

Send flowers to the Saenz family.