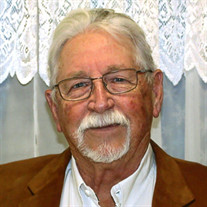 Gerald Loyd Wiles, 74, of Memphis, formerly of Seymour, died Tuesday, January 12, 2021 in Childress. Services will be 11:00 AM Thursday, January 14, 2021 in the First Baptist Church in Memphis. Graveside services with Masonic Rites will be 2:00 PM Friday, January 15, 2021 in Masonic Cemetery in Seymour. Viewing will be held 9:00 AM - 6:00 PM Wednesday, January 13, 2021 at Robertson Funeral Directors in Memphis. Viewing will be held from 4:00 PM-8:00 PM on Thursday and 9:00 AM- 12:00 PM on Friday at Archer Funeral Home in Seymour. Arrangements are by Archer Funeral Home of Seymour and Robertson Funeral Directors of Memphis. Gerald was born January 6, 1947 in Knox City, Texas to Fred and Geraldine Gibson Wiles. He graduated from Texas Tech University in 1977 with a Bachelors degree in Agricultural Science. Gerald married Debra Bowman on December 19, 1981 in Memphis. Gerald and Debbie were long time residents of Seymour where they owned the Rock Inn Cafe from 1996-2015. They moved to Memphis in 2011, where they opened the Rock Inn Cafe. He was a proud Texas Tech fan and loved his Red Raiders. Gerald was a member of the Throckmorton Masonic Lodge and was a 32nd degree mason. He enjoyed showing animals, woodworking, and yard work. He also enjoyed attending his kids and grandkids functions. He was a member of the First Baptist Church in Memphis. He was preceded in death by his parents. Survivors include his wife, Debbie Wiles of Memphis; his son, Wade Wiles of Memphis; his daughters, Tami Land and husband Ray of Seymour and Holly Wiles and wife Jessica of Lubbock; his brother, Rick Wiles of Seymour; his sister, Freida Brown of Seymour; 8 granchildren, Justin Woods, Jacob Woods, Brayden Wiles, Kasen Wiles, Ryder Wiles, Kolt Wiles, Avery Wiles, and Mason Wiles; a great grandson, Jace Woods; and several nieces, nephews, and a host of friends. The family request memorials be sent to the Hall County Livestock Association.

Gerald Loyd Wiles, 74, of Memphis, formerly of Seymour, died Tuesday, January 12, 2021 in Childress. Services will be 11:00 AM Thursday, January 14, 2021 in the First Baptist Church in Memphis. Graveside services with Masonic Rites will... View Obituary & Service Information

The family of Gerald Loyd Wiles created this Life Tributes page to make it easy to share your memories.

Send flowers to the Wiles family.