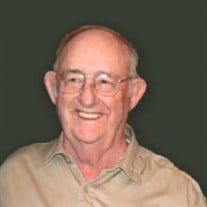 Our mountain of a man, George Steven Ferris died peacefully on December 18th, 2021 at Baylor All-Saints in Fort Worth, TX after a short illness. He was 88. Memorial Services are scheduled for Tuesday, December 21, 2021, at the First Baptist Church in Memphis with Rev. Daniel Downey, officiating. Viewing will be held at the funeral home on Monday, December 20th from 9:00 AM-6:00 PM with family receiving friends from 4:00-6:00 PM. Arrangements are by Robertson Funeral Directors. George was born February 19th, 1933 to Ralph Ferris and Nina Hansen of Rawlins, Wyoming. The oldest of three, George and his two younger sisters Suzi and Nancy enjoyed an adventurous childhood growing up in Wyoming. George later joined the United States Air Force, including two years at Hahn AFB, Germany. While there, he learned to fly gliders from German WWII pilots who befriended him during his time there. In the summer of 1959, the Lord brought him to Memphis, TX. A boy from Wyoming ended up meeting the love of his life in a chance encounter one evening. After a whirlwind romance, George married Laura Janice Smith on October 17th, 1959, eventually setting up roots in Memphis. A year after marriage, their first daughter, Lisa was born. Followed by a son, Steve and another daughter, Catherine. Family was very important to George and he believed in teaching all his children the value of hard work and perseverance. For many years, George ran a crop dusting business as well as worked a ranch. He loved the skies and he loved the land, but you could say farming is where George found his purpose and his peace. He relished the challenge, the unknown and the reward that would come with a successful crop. Even if the year was rough, he was always looking ahead with positivity, often remarking “there’s always next year” with a twinkle in his eye. There was no quit inside him no matter how difficult or challenging life became. He maintained a constant and rigorous work ethic his entire life, something his family and friends admired immensely about him. George is survived by his wife of 62 years, Jan. Daughter Lisa Middleton and husband Mark of Denton, TX. Son Steve Ferris and wife Amy of Flower Mound, TX. Daughter Catherine Clark and husband Gregg of Memphis, TX. Sisters Suzi Martin of Tallahassee, FL and Nancy Larsen of Kingman, Arizona. Grandchildren Laura Riley (Dustin), Sarah, Matthew, and Joshua Middleton, Caitlin, Troy (Michaela), and Gracie Clark, Payton, Reagan, and Shane Ferris. He’s also survived by four great-grandchildren.

Our mountain of a man, George Steven Ferris died peacefully on December 18th, 2021 at Baylor All-Saints in Fort Worth, TX after a short illness. He was 88. Memorial Services are scheduled for Tuesday, December 21, 2021, at the First Baptist... View Obituary & Service Information

The family of George Steven Ferris created this Life Tributes page to make it easy to share your memories.

Our mountain of a man, George Steven Ferris died peacefully on...

Send flowers to the Ferris family.