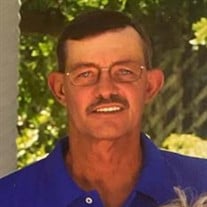 Gary Lynn Thompson, 62, of Hammon, OK was born on February 10, 1959. He was the son of Luther Owen Thompson and Arlene Lorraine Pullum Thompson. Gary passed away on April 27, 2021 in Amarillo, Texas. Gary graduated from Canadian High School in 1977. He went onto work in construction and started Thompson’s Buildings at a young age. He would later transition to the oil field business where he was a contract pumper until he retired. He also enjoyed running cattle and spending his time in the country. More than anything, he loved all the kids and grandkids who called him “Pops”. He had a heart of gold and would give you the shirt off his back. Anyone who knew him remembers his blue eyes, smile and orneriness. Intimate private graveside services will be held at at Plymouth Cemetery in Samnorwood, Texas on Sunday, May 2nd, 2021. Gary is survived by his daughter Jennifer Thompson Hawkins and her two sons, Luke Hawkins and Bo Hawkins of Hammon, OK; his son, Brandon Hicks and wife Kim of Canyon, TX and his four children: Kylie Hicks, Kodie Hicks, Boston Hicks, and Scout Hicks. He is preceded in death by his parents, Luther Owen Thompson and Arlene Lorraine Thompson; one sister, Michelle Thompson; two brothers, Michael Leroy Thompson and Larry Thompson. Memorials can be made to CASA of Western Oklahoma, PO Box 485, Weatherford, OK 73096. “He made it back to Texas....” Arrangements are by Robertson Funeral Directors of Shamrock.

The family of Gary Lynn Thompson created this Life Tributes page to make it easy to share your memories.

Send flowers to the Thompson family.