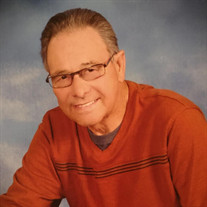 Gary Lee Richards,79, of Amarillo, Texas, passed away on February 15, 2021. He was born December 25, 1941, in Amarillo, Texas, to parents Fred and Lottie Richards. Gary grew up in Amarillo, where he met and married the love of his life, Rose Wynelle, on August 12, 1960. He fulfilled his dream of becoming a police officer in 1960, and he proudly served in law enforcement for over 50 years. Gary received Officer of the Year in 1976 as well as many other awards over the scope of his career. While on active duty, he also earned a Master’s of Science from Wayland Baptist University. Gary was a patriot and Texan through and through. As a faithful member of St. Stephen UMC, he sang in the Stars choir and helped with Wednesday night meals. He had a servant’s heart and loved his family fiercely. He and Wynelle enjoyed traveling and spending time with friends and family, especially their grandchildren. Gary was preceded in death by his wife, Rose Wynelle. He is survived by son T. Sean and wife Tiffany Richards of Wilkinson, Indiana, son Lance and wife Tiffany Richards of Waxahachie, Texas, grandchildren Megan, Justis, Navy, and Titan, brothers Dennis Richards of Memphis, Tennessee, and Ron Richards of Chickasha, Oklahoma, and sister Vickie Simpson of Altus, Oklahoma. A celebration of life will be held at St. Stephen UMC, 4600 S. Western Street, Amarillo, Texas, on March 20, 2021, at 10:00 am. Memorial donations may be made to St. Stephen UMC.

The family of Gary Lee Richards created this Life Tributes page to make it easy to share your memories.

Gary Lee Richards,79, of Amarillo, Texas, passed away on February...

Send flowers to the Richards family.