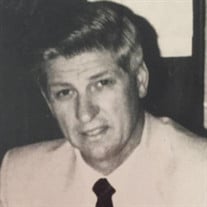 Rev. Freddie Richard "F.R." Johnson, 84, of Stonewall, Oklahoma died Thursday, August 27, 2020 in Stonewall, Oklahoma. Services will be 10:00 AM Friday, September 4, 2020 in the First Baptist Church in Allison with Daniel Johnson, Tim Wood, and Nathan Carrington, officiating. Burial will follow in Zybach Cemetery. Viewing will be from 9:00 AM - 7:00 PM Thursday at the funeral home. Arrangements are by Robertson Funeral Directors of Wheeler. F.R. Johnson was born in Dew, Texas on August 10, 1936 to Cleo Johnson and Viola Caroline Kratz Johnson. He married the love of his life, Olene Nash, on October 3, 1958 in DeRidder, Louisiana. He passed from this life in his home on August 27, 2020, after a brief battle with cancer, surrounded by his wife and children. He was preceded in death by his son, Fredrick, his parents, his brothers, Henry Lee, Eugene, Dean, and sister, Myrdell Wolf. He is survived by his wife Olene of Ada, Oklahoma, his brother Pete and wife Jane of Amarillo, Texas, his son Daniel Johnson and wife Susie from Ada, Oklahoma, his daughter, Becky Wood and husband Tim of San Angelo, Texas, his daughter Gwen Boydston and husband Neal of Fort Collins, Colorado. He is survived by his many grandchildren, Sarah and Chad Henry of Ada, Oklahoma, Fred and Candace Johnson of Murfreesboro, Tennessee, Becky Rabadan and friend Deadrick Ramirez of Del Valle, Texas, Kendall and Jessica Wood of Lubbock, Texas, Timothy Wood of Georgetown Texas, Tabitha and Michael Brixner of Aztec, New Mexico, Breanna and John Norman of San Angelo, Texas, Garren and Jenna Fielding of Midland, Texas, Brandon and Kendall Fielding of Chappell Hill, Texas, Brendon Fielding of Brenham, Texas, Justin Ballard of Center, Texas, Corinna Boydston and husband Clete Fogle of San Antonio, Texas, Kendra and Beau Blakeney of Fort Collins, Colorado, twenty great-grandchildren, and numerous nieces and nephews. F.R. Johnson was an ordained minister of the United Pentecostal Church International for over 50 years and pastored many churches in Texas, New Mexico, Oklahoma and Georgia. He was a former member of the Texico District Board, editor of the Texico Trumpet, and served in multiple positions in ministry in the UPC organization. He grew up a sharecropper’s son in West Texas. His secular careers included sacking groceries at a Piggly Wiggly where he first hit his head on a car trunk while loading groceries and was smitten by a girl named Olene. He was a member of an El Paso pipefitter’s union and was a licensed refrigeration mechanic. He wrote many articles as “Cactus Pete” in the Texico Trumpet and authored the book Johnny Reb and the Preacher. His education included completion of the eighth grade and he often recollected many stories of his school years being spent under the teacher’s desk for misbehavior. He attended Bible school out of Tupelo, Mississippi, and refrigeration mechanic school in El Paso, Texas. Pastor F.R. Johnson loved telling jokes, especially mother-in-law jokes, and was respected and loved by many of his former parishioners. He influenced many people to turn their lives around and serve Jesus. In lieu of flowers, donations can be made to Allison UPC, P.O Box 120, Allison, Texas 79003, where he pastored for over twenty years. A special thank you to Elara Caring Hospice, Sabrina Glenn, RN, Carrie Blaire, CNA Ginger Lynch, RN, and Larry Landtroop, Chaplain, for their care, support, and understanding during this difficult time.

The family of Rev. Freddie Richard Johnson created this Life Tributes page to make it easy to share your memories.

Send flowers to the Johnson family.