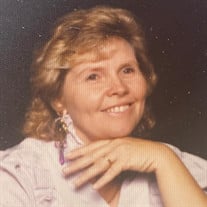 Frankie Gurley, 75, passed away Tuesday, February 2, 2021, surrounded by family and love. Graveside services are scheduled for 11:30 a.m. on Saturday at Fairview Cemetery Chapel in Memphis, Texas. Due to Covid-19 restrictions, the family and friends may visit from 9 a.m.-6 p.m. on Friday at Robertson Funeral Home in Memphis, Texas. Arrangements are by Robertson Funeral Directors of Memphis. Frankie was born on August 27, 1945, in Deport, Texas to Jim James Freelen and Ethel Lavinie Jane Doss. Frankie married the love of her life, Edward Gurley on January 1, 1992. She was a strong, faithful and loving, wife and mother who loved God and her family with all her heart. She was a faithful member of the United Pentecostal Church in Memphis. Frankie was honestly best known as “Mema” to most, and she enjoyed sewing and spending time with her grandchildren. Frankie is preceded in death by her parents, her daughter, Janie Elder, son Shane Gurley; grandsons, Shawn Ray Gurley and Logan Ray Elrod; as well as 5 brothers and 2 sisters. Survivors include her husband, Edward Gurley, who she was happily married to for 29 years, and children, Cynthia and husband Wally Edwards of Memphis, Texas; Susie and husband Roger Young of Paris, Texas; BJ Elrod and girlfriend, Jackie Haddox, of Amarillo, Texas; James and Dana Gurley of Paris, Texas; Lisa and Willie Davis of Tucumcari, New Mexico; Bobbie Gurley, of Phoenix, Arizona; Eddie and Amanda Gurley, of Tuscan, Arizona, as well as her sister, Mary Sue Brumbalow. She was also survived by numerous grandchildren and great-grandchildren.

Frankie Gurley, 75, passed away Tuesday, February 2, 2021, surrounded by family and love. Graveside services are scheduled for 11:30 a.m. on Saturday at Fairview Cemetery Chapel in Memphis, Texas. Due to Covid-19 restrictions, the family and... View Obituary & Service Information

The family of Frankie Louise Gurley created this Life Tributes page to make it easy to share your memories.

Send flowers to the Gurley family.