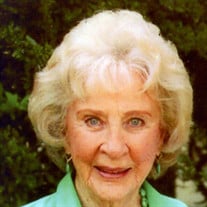 Frances Skelton, a lifelong resident of Clarendon, Texas passed away May 18, 2021. After a private burial at Citizens Cemetery conducted by Robertson Funeral Home, services will be held on Saturday, May 22 at 1:30 p.m. at the First Methodist Church in Clarendon with Reverend Stephania Gilkey officiating. Born to Buel and Eva Sanford on June 19, 1919, Frances joined the First United Methodist Church when she was 13 and continued to be a faithful member throughout her life. She graduated from Clarendon High School in 1936 and attended Clarendon College. She married Willard H. Skelton on July 30, 1937, and they had three children. He preceded her in death in 2005. In earlier years Frances taught kindergarten and worked for Skelton Candy Company while her husband served in the U.S. Navy during World War II. She lived briefly in San Diego with him, often recounting memories of boarding the train in Amarillo with a toddler and baby to make the sleepless journey to California. In 1977 Frances and Willard organized the Fellowship Sunday School Class, and in the middle 1990s, that same class recognized Frances and Willard for 50 years of leadership and dedicated service to the church. She served as church secretary for many years and was active in all aspects of her church. Frances was awarded a Lifetime Membership as a charter member of the Clarendon County Club where she was a member of the Ladies Golf Association, was a member of the Les Beaux Arts Club, and was a volunteer for Meals on Wheels, still helping with deliveries when she was 100. In 2005 she received the Saints’ Roost Award for lifetime achievement and dedication to the community by the Clarendon Chamber of Commerce. Frances had a passion for card games and was an avid bridge player her entire adult life. She enjoyed many years on the golf course as a player and as an active tournament volunteer. She had a zest for life and a ready smile for everyone she met. She was first and always a wife, mother, grandmother, great grandmother and great-great grandmother. Frances was preceded in death by her parents, her husband, her sister Pauline Oswalt, and five grandchildren. Survivors include her children Paula Odom (Gene), Sandy Skelton (Diane), and Candy Scarborough (Charles), eight grandchildren, thirteen great grandchildren, one great-great grandchild, three nieces, and two great-nieces. The family suggests memorials be sent to the First Methodist Church in Clarendon, PO Box 157, 79226.

Frances Skelton, a lifelong resident of Clarendon, Texas passed away May 18, 2021. After a private burial at Citizens Cemetery conducted by Robertson Funeral Home, services will be held on Saturday, May 22 at 1:30 p.m. at the First Methodist... View Obituary & Service Information

The family of Frances Anne Skelton created this Life Tributes page to make it easy to share your memories.

Send flowers to the Skelton family.