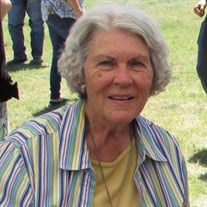 Fleeta Shannon, 78, of Shamrock, passed away on Friday, February 12, 2021, in Wheeler. Graveside services are scheduled for Saturday, February 20, 2021, at 1:00 PM at Shamrock Cemetery. Viewing will be held on Saturday from 10:00 AM to 12:00 PM at the funeral home. Arrangements are by Robertson Funeral Directors of Shamrock. Fleeta Kaaron Carthel was born on May 28, 1942, in Lockney, Texas, to Aaron and Estelle Byars Carthel. She attended Floydada schools and later met her first love, Wayne Adams. They married on March 17, 1959, in Plainview and had three children together. Though their time together was cut short due to his untimely death, she still reminisced on the time she spent with Wayne and his loving family that she cherished so deeply. A resilient young widow, Fleeta moved home and returned to college so she could support her family. She earned her bachelor’s degree from Wayland Baptist University and soon landed a teaching job in Lockney. It was there that she found her lifelong love, Monroe Shannon. They married on June 2, 1979, in Floydada and later moved to Monroe’s hometown of Shamrock. They built a life together and added two more sons to their family. Fleeta taught English in Shamrock for over 25 years. Her life experiences made her a huge proponent of the value of education. She was dedicated to helping students not only succeed in the classroom, but more importantly, in life. After retirement, Monroe and Fleeta opened Route 66 Real Estate that was successful for 10 years. Born a farmer’s daughter, she grew up working with her hands and was taught the importance of earning your way in the world. She loved being outside tending her flower beds, reading, checking cattle, and keeping up their property. There was nothing Fleeta loved more than her family. Her grandchildren and great-grandchildren were her pride and joy. She is preceded in death by her parents; husbands, Wayne Adams, and Monroe Shannon; brother, Gary Carthel; and grandson, Jonah Adams. Fleeta is survived by four sons; Kyle Adams and Adam Chance of Port Isabel, Lon Adams and wife Nicki of Hedley, Hugh Shannon of Lubbock, and Aaron Shannon of Shamrock; daughter, Leeta Prather and husband Stacey of Erick, OK; brother Hulon Carthel and wife Anne of Floydada; brother-in-laws, Mike Shannon and wife Anna, Larry Adams and wife Lois Ann, and Allan Adams and wife Gail; sister-in-laws, Doris Carthel, and Jo Ann Green; six grandchildren, Brandon Prather and wife Nona, Angela Greer and husband Levi, William Adams, Harper Adams, Austin Adams, and Kati Adams; five great-grandchildren, Janie Prather, and Aubree, Bradix, McCoy, and Kabe Greer; and several nieces, nephews, and cousins. In lieu of flowers, the family requests memorials be sent to Meals on Wheels, 205 E. 2nd, Shamrock, Texas, 79079, or the Vietnam War Memorial in Shamrock.

The family of Fleeta Kaaron Shannon created this Life Tributes page to make it easy to share your memories.

Fleeta Shannon, 78, of Shamrock, passed away on Friday, February...

Send flowers to the Shannon family.