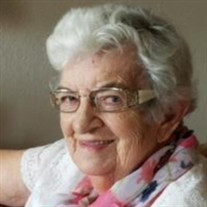 Elaine Gladys Monroe, 92, of Howardwick died on Saturday, September 19, 2020 in McLean. Family directed Memorial Services will be held on Saturday, November 7, 2020, at 2:00 PM at Prince of Peace Lutheran Church in Amarillo, Texas. Cremation and arrangements are by Robertson Funeral Directors of Clarendon. Elaine was born on January 20, 1928 in Milwaukee, Wisconsin to Frank and Emily Glaser Schumacher. She had married Albert Berg and after his death, she had married Matt Monroe in July 22, 1986 in Las Vegas, Nevada. Elaine had worked on the assembly line for Allen Bradley Manufacturing and later taught pre-school. Prior to moving to Howardwick in 2018 she had been a resident of Pipe Creek, Texas. Elaine was a member of Prince of Peace Lutheran Church in Amarillo. She was preceded in death by her parents, Frank and Emily Schumacher; her first husband, Albert Berg; her second husband, Matt Monroe; and by a half-sister, Eleanore Blenski. Survivors include 2 daughters, Marcia Shackelford and husband Curt of Howardwick, Carol Wallberg of Bandera, Texas; 2 grandchildren, Angela Van Stavern and husband Chris of Boerne, Texas and Ashley Driskell and husband Brendan of Brooksville, Florida; 3 great grandchildren, Cager and Karli Van Stavern of Boerne, Texas and Keldan Driskell of Brooksville, Florida; 3 nephews, Roman, Robert, and Ronald Blenski; and by a niece, Ellie Zyrek.

The family of Elaine Gladys Monroe created this Life Tributes page to make it easy to share your memories.

Send flowers to the Monroe family.