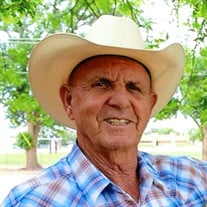 Earnest Wayne Tubbs, 78, passed away on October 20, 2020 at his home in Clarendon surrounded by his family. A memorial service will take place at 2 p.m. on Saturday, October 24, 2020, at the First United Methodist Church of Clarendon with pastor Stephania Gilkey officiating. Arrangements are under the direction of Robertson Funeral Directors of Clarendon. Wayne was born January 2, 1942 in Carrizozo, New Mexico to Garvis Wayne and Earlena Berry Tubbs. He married Patsy Ann Sharp on December 9, 1961. Wayne worked 30 years for El Paso Natural Gas Company, first as a pipeline welder and eventually as a district superintendent. He repaired and refurbished antique furniture after his retirement and was affectionately known by his wife Patsy as the “Chair-man of Clarendon.” He was an avid carpenter, helper, father, grandfather, great-grandfather and friend. He served on the Donley County Hospital District Board for several years. He was also a longtime member of the First United Methodist Church of Clarendon and loved attending Sunday School and bible studies. Wayne prided himself as a family man and recently became a great-grandfather to his namesake Grady Wayne Grotegut, who he nicknamed “Wee Boy.” He cared for many other children in the community, among them Jayde and Braxton Gribble and Kase and Kinze Zongker. Wayne is preceded in death by his parents Garvis Wayne and Earlena Berry Tubbs, his brother Garvis Earl Tubbs, and his granddaughter JeanAnn Tubbs. He is survived by his wife, Patsy Tubbs, his son Laban Tubbs and wife Jennifer of Clarendon, his daughter Tonya Newton and husband Clay of Albuquerque, New Mexico, his grandson Ty Tubbs of Clarendon, his granddaughter Ashlyn Grotegut and husband Parker of Gruver, and his great-grandson Grady Wayne Grotegut (Wee Boy). In lieu of flowers, the family requests memorials be sent to the First United Methodist Church of Clarendon or Kindred Hospice 3232 Hobbs Road Amarillo, Tx 79109.

Earnest Wayne Tubbs, 78, passed away on October 20, 2020 at his home in Clarendon surrounded by his family. A memorial service will take place at 2 p.m. on Saturday, October 24, 2020, at the First United Methodist Church of Clarendon with... View Obituary & Service Information

The family of Earnest Wayne Tubbs created this Life Tributes page to make it easy to share your memories.

Send flowers to the Tubbs family.