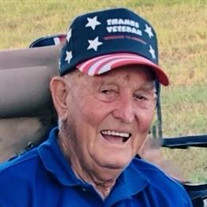 Memorial services for Earl Dee "Papa Dee" Jolly, will be conducted Friday, February 25, 2022 at 11:00 AM in Cornerstone Church in Wheeler. Private family burial will be in Wheeler Cemetery in Wheeler prior to the service under the direction of Robertson Funeral Directors of Wheeler. Viewing will be held Thursday at the funeral home with family receiving friends for visitation from 4:00-6:00 PM at the funeral home. Earl Dee Jolly was born April 30, 1931 in Wheeler County, Texas to Earl Dee “Jack” and Valle Marie Clay Jolly and passed away Friday, February 18, 2022 at the age of 90. He attended school in Wheeler, Texas. He was married to Ann Blackshear February 27, 1953. She preceded him in death on June 12, 1980. Earl was then married to Shirley Moore Patterson on March 20, 1982. She preceded him in death on August 14, 2018. Earl proudly served his country in the US Army from 1953 to 1955. He was known as the “Bread Man” by my many in the community. Earl was the local route salesman for Mead's Fine Bread and then for Mrs. Baird's Bread, where he happily retired in 1996. He was also a member of the Wheeler Lions Club and the Shamrock Country Club. In his spare time he loved to golf with his friends, attend numerous sporting events and family gatherings for his kids, grandkids, and great grandkids. He was preceded in death by his parents; his first wife, Ann; his second wife, Shirley; and his brothers, Wayne and Bailey Jolly. Survivors include his six children, Brenda Martin and husband Craig of Elk City, Oklahoma, Myron Jolly and Delinda King of Wheeler, DeAnn Foshee and husband Jerry of Elk City, Oklahoma, Vickey Nelson of Canadian, Cathy Hooper and husband Frank of Amarillo, and Steve Patterson and wife Krysti of Oklahoma City, Oklahoma; 17 grandchildren; 19 great grandchildren; and 4 great great grandchildren.

Memorial services for Earl Dee "Papa Dee" Jolly, will be conducted Friday, February 25, 2022 at 11:00 AM in Cornerstone Church in Wheeler. Private family burial will be in Wheeler Cemetery in Wheeler prior to the service under the direction... View Obituary & Service Information

The family of Earl Dee Jolly created this Life Tributes page to make it easy to share your memories.

Send flowers to the Jolly family.