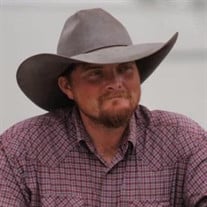 Dustin Lee Hunt, 26, of Wheeler died Friday, September 4, 2020 in Dallas. Services will be 2:00 PM Thursday, September 10, 2020 in the First Baptist Church in Wheeler with Billy Snider, officiating. Burial will follow in Wheeler Cemetery. Viewing will be held Wednesday 9:00 AM-7:00 PM at the funeral home. Arrangements are by Robertson Funeral Directors of Wheeler. Dustin was born September 24, 1993 in Pampa to Freddy and Amy Helton Hunt. He had been a lifetime resident of Wheeler and married Maegan Bridgman on July 20, 2014 in Wheeler. Dustin loved to cowboy, ride ranch broncs, break colts, and his favorite time of the year was branding season. He dearly loved his wife, family, son, and his friends. He was preceded in death by his grandfather, Leroy Hunt. Survivors include his wife, Maegan Hunt of Wheeler; his parents, Freddy and Amy Hunt of Wheeler; his son, Jasper Hunt of Wheeler; a child on the way in January; his paternal grandmother, Peggy Hunt of Wheeler; his maternal grandparents, Perry and Paula Helton of Wheeler; his brother, Hank Hunt of Wheeler; his sister, Donna Walsh of Michigan; and numerous nieces, nephews, aunts, uncles, and cousins. The family request memorials be sent to WAAIC-Hunt Family / PO Box 489 / Wheeler, TX 79096.

The family of Dustin Lee Hunt created this Life Tributes page to make it easy to share your memories.

Send flowers to the Hunt family.