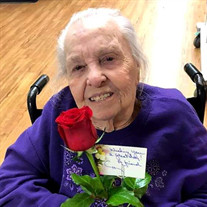 Dottie Charlotte Shipman, 93 of Shamrock, Texas passed away peacefully on Nov. 18th, 2020 in Wheeler, Texas. Charlotte was born to Basil and Dottie Good in Konowa, Oklahoma on September 27th,1927. Her mom passed away during her first year of life and she was raised by her dad and bonus mom, Loretta Good. Charlotte’s family moved to Texola, Oklahoma in 1940. She grew up working in the family’s cafe named The Family Cafe. This training served her well as she later went on to be a consummate and gracious hostess in the Shipman household. She married W.P. “Dub” Shipman in 1947 and traveled the country pipelining until settling in Shamrock, TX in 1958. She was a member of the First Baptist church where she was baptized. Besides being a loving wife and homemaker she was a doting mother of two children, Donna Cox and Jimmy Shipman. She was also employed as a seamstress at Marie Foundations for 15yrs. Charlotte was preceded in death by her parents, her husband, Dub Shipman; her sister, Alpha Lisle; her brother, Carl Dean Good; and her son Jimmy Shipman. She is survived by her Daughter, Donna Cox; Daughter in Love, Monica Hall; four grandchildren; Cheramy, Britten, Shelby, and Tanna; 12 great-grandchildren; and her beloved puppy Gabby. Charlotte was probably best known as “Grammy”. She was the absolute BEST Grammy to her grandkids. She taught driving, baking, sewing and crochet lessons. Attended and cheered at every extracurricular event on the calendar. Made special order meals and snacks on a moments notice... even after midnight. She especially loved wrapping and stacking Christmas packages to the ceiling. Grammy had a true servants heart and had the greatest love for her family. In fact, diet coke, her closet full of dancing boots, and a few hundred dolls she collected were the only things that could truly compete for her affections. Grammy, they broke the mold with you! We will cherish the memories and your beautiful soul will be loved and remembered always.

Dottie Charlotte Shipman, 93 of Shamrock, Texas passed away peacefully on Nov. 18th, 2020 in Wheeler, Texas. Charlotte was born to Basil and Dottie Good in Konowa, Oklahoma on September 27th,1927. Her mom passed away during her first year... View Obituary & Service Information

The family of Dottie Charlotte Shipman created this Life Tributes page to make it easy to share your memories.

Send flowers to the Shipman family.