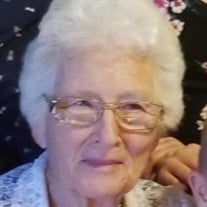 Her children will rise up and call her blessed. Proverbs 31:28 Doris Fay Brotherton Finsterwald, age 88, of Mobeetie, TX passed away on January 26,2022 in Wheeler, TX. Graveside services will be 2:00 PM Saturday, January 29, 2022 in the Wheeler Cemetery, Wheeler, TX. Viewing will be on Friday, January 28, 2022 at Robertson Funeral Directors in Wheeler, TX from 9:00 a.m to 6:00 p.m. Arrangements are by Robertson Funeral Directors of Wheeler. She was born in a farmhouse Southwest of Mobeetie, TX on August 28, 1933. Doris is the youngest daughter of the late Claudy and Ina Mae Vise Brotherton. Doris was preceded in death by, her husband of 38 years, Jack Finsterwald, her parents, and a brother and sister-in-law C.B. and Maurine Brotherton, and a brother-in-law, Elmer Honath. She was a member of First Baptist Church, Mobeetie, where she played the piano for over 30 years, she played for numerous funerals. Doris was a homemaker, she enjoyed crocheting, embroidery and spending time with her children, grandchildren, and great grandchildren. She loved her garden and her flower beds. Doris faithfully visited residents in the nursing home and friends that were homebound, often taking one of her delicious homemade pies when she visited. Doris enjoyed playing games with anyone that would play with her, especially the grandchildren. Many hours were spent around her dining room table playing dominoes and wahoo with family and friends. A basketball player in High School, Doris was always up for a game with her children and grandchildren, and she played to win! Doris is survived by three sons and 3 daughters-in-law. Bill and Tonya Finsterwald of Mobeetie, Bob and Mary Nell Finsterwald of Mobeetie, and Jerry and Janice Finsterwald of Mt. Airy, MD. And a sister Dorothy Honath of Amarillo. She was a loving grandmother to Randy and Tera Finsterwald; April Finsterwald; Andy Finsterwald; Meghan and Mike Allred; Matt Finsterwald; Brandon and Maggie Finsterwald; Merideth and Josh Romanchuk. She also leaves behind a special nephew Gary and Kathy Brotherton and family, plus a host of family and friends including 7 great grandchildren. Pallbearers will be her grandsons, Randy Finsterwald, Andy Finsterwald, Matt Finsterwald, Brandon Finsterwald, and nephew Gary Brotherton, and great nephew Ryan Brotherton. In lieu of flowers, memorials may be sent to First Baptist Church, Mobeetie, P.O. 160, Mobeetie, TX 79061.

Her children will rise up and call her blessed. Proverbs 31:28 Doris Fay Brotherton Finsterwald, age 88, of Mobeetie, TX passed away on January 26,2022 in Wheeler, TX. Graveside services will be 2:00 PM Saturday, January 29, 2022 in the Wheeler... View Obituary & Service Information

The family of Doris Fay Brotherton Finsterwald created this Life Tributes page to make it easy to share your memories.

Her children will rise up and call her blessed. Proverbs 31:28

Send flowers to the Finsterwald family.