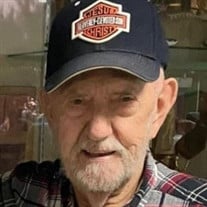 Donald Lee Poole was born October 1, 1933 in Madison, Illinois went to be with the Lord on August, 28, 2021. Services will be 12:30 PM Friday, September 3, 2021 in the Eleventh Street Baptist Church in Shamrock with James Henderson, officiating. Burial will follow in Shamrock Cemetery in Shamrock. Viewing will be held Thursday at the funeral home. Arrangements are by Robertson Funeral Directors of Shamrock. Donald joined the United States Marine Corp in 1950. He was deployed to the war in North Korea. He was one among 385 men that survived out of the 13,000 Marines deployed at Chosin Reservoir. He worked as a guard in Pocatello, Idaho when the first atomic submarine, the Nautilus was being constructed and later he was a guard at the Pentagon. He was awarded several medals for his service to his country. Later in civilian life, he was a truck driver and member of the Teamsters union in California and Oklahoma. Donald wasn't afraid of hard work and passed on that work ethic to all his children and grandchildren. He was not afraid to learn new things and became quite a good carpenter, even remodeling his Shamrock home and building the kitchen cabinets. He was a generous and giving man, he was willing to provide a home as a foster parent to many other kids in need of a safe environment. He had a great sense of humor and was loved by all who met him. He was a volunteer with Texas Baptist Mens Association and Christian Builders Association even working at Panfork Baptist Youth Camp. He was a member of the Eleventh Street Baptist Church in Shamrock. Donald had a very special relationship with Neldas' brother, Kenneth Shaffer, learning many new skills and most importantly, they shared a love for the Lord. Kenneth was called home to be with Jesus on August 28, 2008, thirteen years before Don went to be with the Lord on that same date. Donald married the love of his life, Nelda Jo Shaffer on September 16, 1968 in Reno, Nevada. He had 4 children and she had 2 then they had 3 together. Donald was preceded in death by his parents, Fred and Clara Poole; Brothers, Alfred, Conrad, Leon; and sisters, Lois Boyet and Sadie Risner; and a son, Danny Lee Poole. Donald is survived by his wife, Nelda; daughters, Angelyn Poole, Beverly Gosney, Kim Muir, Tammy Poole, Karen Weltmer and husband Greg; sons, Neil Bryan Poole and wife Hollie, Phillip Raddatz and wife Malisa, Adam Poole and Megan Beaty, and Alfred Poole and wife Anita, and Charlene Poole. He is also survived by grandchildren, D'Artagnan Whiteman, Tryston Poole, Jacob Poole, Shirene Shojaee, Leila Shojaee, Kavon Shojaee, Christopher Poole and wife Jessica, Brittney Gaither and husband Brandon, Tori Capobianco, Courtney Wallace and husband Mark, Zachary Poole, Keira Kizziar and husband Zach, Ashlyn Poole, Donovan Poole, Gavin Poole, Sara Farzammehr, Le'Alyce Spells, Hillary Spells and Charles Spells, Lilliana Roberts, and Gunner Roberts; 12 great grandsons; 1 great granddaughter; numerous nieces and nephews, all of whom loved him very much and throughout their lives called him Uncle Donnie. In lieu of flowers, donations can be made to the Eleventh Street Baptist Church Shoebox Ministry at 1010 N. Missouri Street, Shamrock, TX 79079.

Donald Lee Poole was born October 1, 1933 in Madison, Illinois went to be with the Lord on August, 28, 2021. Services will be 12:30 PM Friday, September 3, 2021 in the Eleventh Street Baptist Church in Shamrock with James Henderson, officiating.... View Obituary & Service Information

The family of Donald Lee Poole created this Life Tributes page to make it easy to share your memories.

Send flowers to the Poole family.