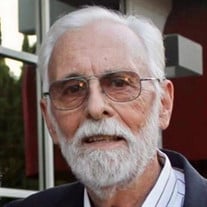 Dick Bode passed from this life after a valiant battle with Covid-19 on Tuesday, December 15, 2020. He was one of a kind, had a quick wit, and was respected, admired, and loved by many. Born in Bloemendaal, Holland in 1934, Dirk Hendrik Willem Bode van Ysselmonde spent his younger years under the occupation of the Nazis. His task was helping his father deliver messages to the Dutch Underground during World War II, and he suffered two gunshot wounds at the hands of a Nazi soldier. They also hid Jews in their home, for which a tree was planted in their honor at Yad Vashem, in Jerusalem, Israel. After Holland was emancipated by American and Canadian soldiers, the family decided to make the move to America. He proudly served in the U.S. Air Force as a green card holder, becoming part of the Strategic Air Command and paying it forward to the Americans that helped them to gain their freedom. He was very proud to become an American citizen, and proudly spoke at many Veteran's Day programs and other meetings, telling his story and proclaiming his love for America. He met Barbara, his sister Peggy's best friend, when he was home on leave. She became the love of his life and they married June 13, 1959. After the birth of their three children and moves to Oklahoma and Mississippi, he and Barbara made the move to Alanreed in 1975. He was proud to be a Texan, and took pride in serving the people of the panhandle as an insurance man, providing excellent service to his many clients. At the age of 86, he still worked most days at his office until he became ill in mid-November. He was a member of the United Methodist Church of McLean, the American Legion, and served many years as the President of the School Board in Alanreed and as President of the McClellan Creek Soil & Water Conservation District. He loved the peace and serenity he found on the ranch, walking daily at sunset to take in all the beauty. He will be laid to rest there in a private graveside ceremony. A celebration of his life will be held at a later date. He was preceded in death by his parents, a brother, Hank Bode, and a baby sister, May Ginger Margriet Bode. He is survived by his sweetheart of sixty two years, Barbara Bode, a daughter, Margie Braidfoot and husband Randy of Panhandle, sons Dirk Bode and Don Bode and wife Michele, of Amarillo, grandsons, Ben Braidfoot of Panhandle, Bo Braidfoot and wife Lynda of Georgetown, TX, Brice Bode and Chance Bode, both of Lewisville, granddaughter Laci Johnson of Grand Prairie and a great granddaughter, Emma Melber of Georgetown. As the eldest child, he will also be missed by his brothers and sisters, Peggy Tous and husband George, Tom Bode and wife Lisa, Don Bode and wife Marcia, and sister-in-law Sherri Bode all of California, Betty Weir and husband Dick of Austin, TX, Anneke Pinkham and husband Rob of Tyler, TX, Helen Stamps and husband Dennis of Harpenden, England, sister-in-law DeEllen Baxter of Ashland, Oregon, and many nieces, nephews, relatives and friends, who will miss him greatly. Memorials may be made to United Methodist Church of McLean.

Dick Bode passed from this life after a valiant battle with Covid-19 on Tuesday, December 15, 2020. He was one of a kind, had a quick wit, and was respected, admired, and loved by many. Born in Bloemendaal, Holland in 1934, Dirk Hendrik Willem... View Obituary & Service Information

The family of Dick H. Bode created this Life Tributes page to make it easy to share your memories.

Dick Bode passed from this life after a valiant battle with Covid-19...

Send flowers to the Bode family.