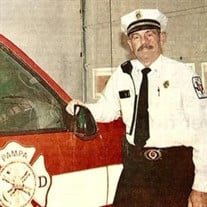 Davie Carl Turner, 81, of Pampa died Sunday, May 22, 2022 in Pampa. Services will be at 11:00 AM Wednesday, May 25, 2022, at Hobart Baptist Church in Pampa. Graveside services will be at 2:00 PM Wednesday at the Wheeler Cemetery in Wheeler. Viewing will be from 10:00 am until service time Wednesday at the Church. Arrangements are by Robertson Funeral Directors of Wheeler. Davie was born June 12, 1940, in Wheeler to C.H. and Reda Mae Swetnam Turner. He married Vangie Matheny on December 11, 1960, in Santa Cruz, New Mexico. He and his young bride moved to the Van Zandt Ranch in Wheeler County Texas where he was a ranch hand. They moved to Pampa in 1962. He was a firefighter for the City of Pampa for 36 years, where he did everything from fighting fires to serving as acting captain. He also worked at the Texas Furniture Store for 35 years. Davie was an avid fly fisherman, loved traveling, camping in the mountains, and dancing with his beautiful bride. He was a handy man who could fix just about anything. He built an addition onto his home with the help of his family and friends. He was a dedicated husband and father, and dearly loved his family. The family would like to thank the Meredith House for the loving care shown to Davie the past several years. He was preceded in death by his parents. Survivors include his wife of 61 years, Vangie Turner of Pampa; his daughters, Carla Howard and husband Bill of Wheeler, Julie Moore and husband Bruce of Athens, and Heidi Baggerman and husband Eugene of Pampa; a brother, Jesse "J.W." Turner of Matador; a sister, Maurita Pittman of Pampa; 6 grandchildren, Ben, Rachel, Ryan, Thomas, Renee, and Jessica; 4 great grandchildren, Perry, Kyle, Parker, and Griffin; and several nieces and nephews. The family request memorials be sent to Toys for Tots or Snack Pak 4 Kids, 701 Park Place Ave., Amarillo, TX 79101. Please put PAMPA on memo line of check.

The family of Davie Carl Turner created this Life Tributes page to make it easy to share your memories.

Send flowers to the Turner family.