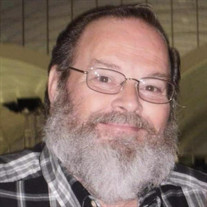 David Jones, age 68, of Baker, Florida, went to be with Jesus on Jan. 25, 2022. David was the kindest man I knew. He was a long time truck driver, but had been home for the holidays at the time of his passing. David was born in Plainview, Tx, and later moved to Clarendon when his father passed away where he had several aunts, uncles, and a grandmother. David's mom was Luceil Tyler. However, his mom did move back to Plainview in David's high school years where he graduated from. After high school, he joined the army, of which he was very proud of his time in service where he rose to the rank of Sgt. He was over the Clarendon VFW post in the early 2000's. He was a member of the Turkey Lions Club when they lived there. David enjoyed life, nature, and photography. He had a passion for motorcycle riding, and he often took long trips with his wife or his brother. He enjoyed traveling and seeing new places. David never met a stranger. He had numerous friends and will be missed by us all. He always told his wife he'd be here till God called him home, she just never knew how soon that would be. He enjoyed the simple things in life and will be missed by his wife, children, family, and friends. He was survived by his wife Teresa Jones; three daughters, Christa and her husband Sky Wallace of Laurel Hill, Florida, Shanda and her husband Trey Bates of Amarillo Tx, and Katrina McNeely of Baker, Fl. He also has 4 grandchildren who he was extremely proud of, Damian Wallace of Ft. Bragg, NC, Dylan Wallace of Laurel Hill, FL, and Eli Bates and Emma Bates of Amarillo, TX. He also is survived by 2 sisters, Helen Brown and brother in law, Troy, of Amarillo TX, and Sheila Love and brother in law, Michael; brother, Allen Love and sister in law, Diane, of Lubbock, TX, and one sister in law, Sue Jones. He has several nephews and a niece. He was preceded in death by his parents, Guy Jones and Luceil Tyler Jones; his son, Guy David Jones, brother, Bennie Jones; sister, Betty (Sissy) Love and brother in law, Cecil Love. Memorial services will be March 30, 2022, at 2:00 pm at Robertson's Funeral Home in Clarendon, TX with military honors to follow at Citizens Cemetery. Until we see you again.

David Jones, age 68, of Baker, Florida, went to be with Jesus on Jan. 25, 2022. David was the kindest man I knew. He was a long time truck driver, but had been home for the holidays at the time of his passing. David was born in Plainview,... View Obituary & Service Information

The family of David Lloyd Jones created this Life Tributes page to make it easy to share your memories.

Send flowers to the Jones family.