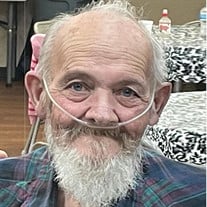 David Alan Doane, 71, died Monday, May 9, 2022. Family Directed Memorial Services will be held at 1:00 PM on Friday, May 13, 2022, at the Community Fellowship Church in Clarendon with Pastor Larry Capranica officiating. Cremation and arrangements are by Robertson Funeral Directors of Clarendon. David was born December 26, 1950, to Betty and Donald Doane in Quincy, Ill. He enlisted in the Air Force October 1970 to January 1975. He was last stationed in Amarillo, where he met his soul mate and love of his life Lynda Bettis, and married her on December 28, 1974. They had three children, Angie (Mike) Goodson of Amarillo, Stacy (Jeremy) Davis of Amarillo, and Josh (Cynthia) Doane of Wilburton, OK. Dave and Lynda had 12 grandchildren and 2 great grands. To Angie & Mike: Derek, Taylor, Ashley & Jonathon. To Stacy & Jeremy: Clay, Allysa, Ethan, Autumn & Abigail. To Josh & Cynthia: Khiahna, MaKayla & Kyleigh. Their two great grands are Asher & Bryleigh. He was met in Heaven by his parents, his mother and father in law, older brother, Donny, and one great grand, Axyl. He was survived in death by his bride & children, grandchildren and great grands, his younger brother, Rick, 2 brother in laws and 2 sister in laws, and many nieces and nephews.

The family of David Alan Doane created this Life Tributes page to make it easy to share your memories.

Send flowers to the Doane family.