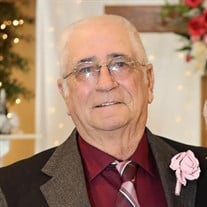 David Anthony "Dave" Kreyling, 77, of Pampa died Friday, November 27, 2020 in Pampa. Graveside services will be 2:00 PM Saturday, December 5, 2020 in Wheeler Cemetery in Wheeler with Franklin McDonough, officiating. Viewing will be held Friday, December 4, 2020 at Carmichael-Whatley Funeral Directors in Pampa. Masks will be required, Arrangements are by Robertson Funeral Directors of Wheeler. David Kreyling was born on May 31, 1943 in St. Louis, Missouri to Ralph and Alice Kreyling. He married his true love, Betty Lou Kidwell on May 25, 1978 in Wheeler, Texas. Dave graduated from Naylor, Missouri High School in 1961. Shortly after in 1962 he moved to Amarillo, Texas to work in Gas distribution and meter repair. in 1963, he became a Plant operator for the Turkey Creek Plant in Fritch, Texas. In 1970, he transferred to Wheeler, Texas and the new H2S treating plant as an operator. This plant was the first of its kind built in the US. In 1980, Dave transferred to the Arrington plant as a plant mechanic. Later in 1985 he moved to Dumas, Texas to the Yake Merchant Plant as supervisor of maintenance operations. In 1987, he was promoted to Superintendent of More Co. Systems. Dave and Betty moved to Pampa in 1989 where he served as District Superintendent of American Oil and Gas retiring from there in 1994. Dave then went to work for TDCJ in 1995 as a mechanic in the food and laundry services retiring from there in 2005. Dave spent many hours invested in things he loved. In 1979, he designed and built the football stadium bleachers and press box for Wheeler ISD, the same ones that are still in use today. He had many years of cabinet building and house remodeling. His welding skills and repair served him well in retirement as did his hot shot services. He was an active member of the Summerville Church of Christ. Dave is preceded in death by his grandparents, James and Ethel Gayle; his mother, Alice Ferguson; step father, Carl Ferguson; step son, Michael Johnson; son in law, Stanley Beck; brother in law, Bud Kidwell; step grandson, Jake Tolbert; and a niece, Kimberly Kidwell. He is survived by his wife of the home, Betty Kreyling of Pampa; daughter, Barbara Tolbert and husband Scott of Pampa; daughter, Tina Bond and husband Rick of Wheeler; son, James Kreyling and wife Sherry of Harviell, Missouri; daughter, Kathy Borden and husband Leland of Linden, Texas; two sisters in law, Barbara Rector of Pampa and Karilyn Kidwell of Amarillo; 12 grandchildren, Tony Beck and wife Jennifer. Mattie Eldridge, Mason Eldridge, Amanda Robertson and husband Chuck, Abby Lenz and husband Isaac, James Kreyling and wife Nicole, Alyessea Kreyling, Renee Bynum and husband Rodney, Michael Hunt and wife Shelly, Chelsea Roberts and husband David, Drake Tolbert, and Tate Tolbert; 12 great grandchildren with one more expected to arrive about the time of Dave's birthday. The family request memorials be made to Wheeler Cemetery Association / PO Box 672 / Wheeler, TX 79096 or the charity of your choice.

The family of David "Dave" Anthony Kreyling created this Life Tributes page to make it easy to share your memories.

Send flowers to the Kreyling family.