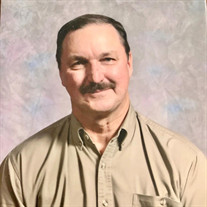 Dale Lynn Clawson was born to Blackie and Irene Clawson on July 8, 1945 in Rotan, TX. He went peacefully to be with the Lord on February 7, 2020 at his home in Kelton, TX. Viewing will be at Robertson Funeral Home in Wheeler, Texas, Wednesday, February 12 9 a.m.- 6p.m. and Thursday, February 13, 9 a.m.-1 p.m. The funeral will be at Cornerstone Church in Wheeler, Texas on Thursday, February 13 at 3 p.m. Interment will be at Kelton Cemetery in Kelton, Texas. Dale was the oldest of Blackie and Irene’s 10 children. He spent some of his formative years with his grandparents Danie and Pearl Gruben. Danie had a great influence on Dale’s life. Growing up in the Rotan area, Dale had many grand adventures with his siblings. After high school Dale worked for a rodeo ranch in southeastern Oklahoma. In 1965 Dale joined the Texas National Guard. In January 1966 Dale met the love of his life, Carol Motes Reeder, and her young son Tony. Dale married Carol in 1967 and adopted Tony. For several years Dale lived and worked in the Noodle area for Al Griffith, farming and ranching. In 1974 Dale renewed his relationship with the Lord and he and Carol were called to be house parents at Boys Village in Lake Charles, LA. They spent the next 7 years parenting dozens of boys in Lake Charles and the Houston area. Dale and Carol came to Wheeler County in 1990 to work for his brother-in-law Garland Moore. In 1993 he began Wheeler Construction. He spent the remainder of his life as a master electrician and a servant of the community. Dale loved the Lord, his family, his friends, his church, his country, hunting and fishing. Dale was a wealth of knowledge who never met a stranger, and would do all he could to help anyone in need. Dale was preceded in death by his parents, grandparents, and his son Donnie Lynn. He is survived by his wife Carol, his sons Tony, Lonnie, Barry and wife Marla, Dave and wife Jen, and Danie, as well as 3 grandsons Clay, Wyatt, and Cullen, granddaughter Ashley and husband Brian Pledger and their sons, Kayden, Karter, and Kash. He is also survived by his 9 siblings Ronnie, Linda, Jerry, Gary, James, Danny, Cindy, Sandy and Sheila, and many nieces, nephews and loved ones. Dale, his many talents and stories will be greatly missed by all who knew him.

Dale Lynn Clawson was born to Blackie and Irene Clawson on July 8, 1945 in Rotan, TX. He went peacefully to be with the Lord on February 7, 2020 at his home in Kelton, TX. Viewing will be at Robertson Funeral Home in Wheeler, Texas, Wednesday,... View Obituary & Service Information

Dale Lynn Clawson was born to Blackie and Irene Clawson on July...

Customized sympathy cards. Mailed for you.